Karapetyan fired Armenia in front in the 13th minute of the Group J match but was dismissed in first-half stoppage time for a second yellow card in what seemed a very harsh decision. 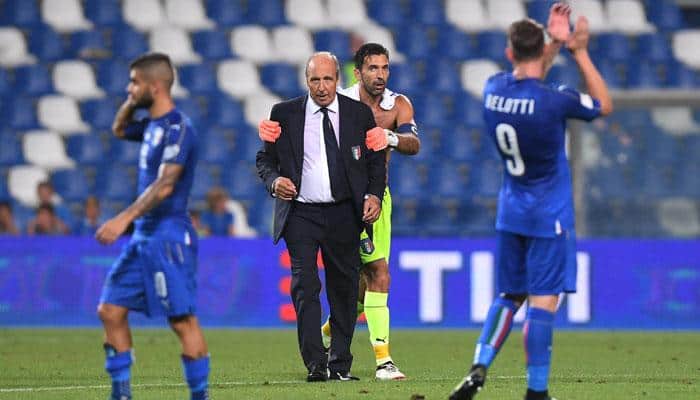 Italy recovered from an early shock as they came from behind to beat Armenia 3-1 in a Euro 2020 qualifier on Thursday, the hosts playing the entire second half with 10 men after goalscorer Aleksandre Karapetyan was sent off.

Karapetyan fired Armenia in front in the 13th minute of the Group J match but was dismissed in first-half stoppage time for a second yellow card in what seemed a very harsh decision.

Italy, who had levelled through Andrea Belotti in the 28th minute, wrapped up the match in the last 15 minutes with Lorenzo Pellegrini`s first goal for his country and another strike from Belotti.

It was anything but easy for Italy, however, as Armenia threatened with a series of counter-attacks before running out of gas towards the end.

Leaders Italy maintained their 100 percent record in the group with 15 points from five games while Armenia, 3-2 winners over Greece in their previous match, are third with six points.

"Their sending-off made it difficult for us as they closed up their defence," said Italy coach Roberto Mancini.

"Today it was difficult to play: our players have two league games under their belts, Armenia are in mid-season. It`s not an excuse, it`s the truth."

Armenia stunned the visitors when Tigran Barseghyan broke up an Italy attack, surged out of defence and slipped the ball to Karapetyan who scored with a low shot from the edge of the area.

Belotti levelled in the 28th minute, volleying home a cross from Emerson, one of two Brazilian-born players in their side alongside Jorginho

Federico Bernardeschi and Belotti both clipped the woodwork before Karapetyan was given a second yellow card after a challenge on Leonardo Bonucci.

Although Armenia closed ranks after the break, they launched some very threatening breaks and, in one, Kamo Hovhannisyan burst down the left touchline, running 70 metres before finding Henrikh Mkhitaryan whose shot was deflected wide.

With Mancini increasingly agitated on the touchline, Bonucci swung a high ball into the area and Pellegrini touched it into the net with a neat header in the 77th minute.

Three minutes later, Belotti turned his marker and his shot hit the foot of the post, struck goalkeeper Aram Airapetyan and ricocheted into the net.

India go down fighting against Oman in World Cup qualifier