Not just David Beckham and Tom Cruise, Britain’s Prince William were also at Wembley along with his wife Kate and son George as they were spotted rooting the home team on Sunday. 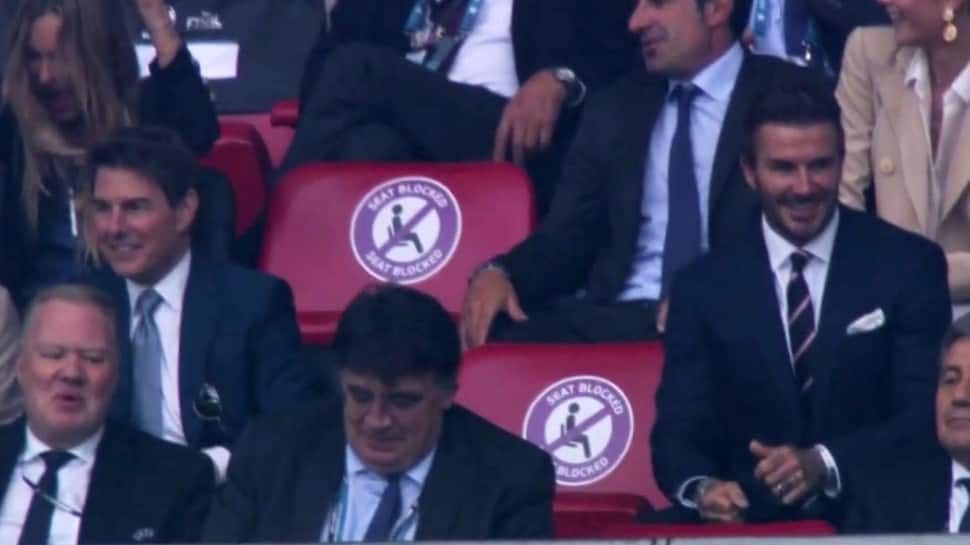 It was a starry affair at the iconic Wembley Stadium in London on Sunday (July 11) when England took on Italy in the UEFA Euro 2020 final. Upping the glamour quotient, former England football captain David Beckham and mega Hollywood actor Tom Cruise were spotted sitting next to each other in the stands. But, what stole the show was the two of them fist-pumping after England’s Luke Shaw scored the opening goal in the second minute of the game to give England the lead.

The video of the two mega-stars fist-bumping is being loved by their fans. Here is the video that is going viral:

Not believing what they had seen, some fans flocked to social space and reacted:

Personal highlights of the first half:

1. Luke Shaw's blinding finish
2. Jordan Pickford just existing for 94 minutes
3. David Beckham in the crowd sharing a fistbump with Tom Cruise who was also sitting next to Jeff Goldblum for some reason.

Been a good half!

Highlight of my night, seeing Tom cruise and David beckham fist bump in the crowd watching the euros

Nonetheless, what followed was nothing short of a heartbreak for Cruise, Beckham and all the English supporters as Harry Kane & Co. couldn’t hold onto their lead with Italy’s Leonardo Bonucci scoring the equaliser in the 67th minute. England paid the price for their defensive tactics in the final half as the match went to the penalty shootout, where Giorgio Chiellini-led side holding onto their nerves to emerge on top with a 3-2 scoreline.

The former English captain has been a regular fixture in the English crowds at Euro and Wimbledon over the last week. He was also seen watching the Euro 2020 semi-final between England and Denmark at Wembley last week.

Not just Beckham and Tom Cruise, Britain’s Prince William were also at Wembley along with his wife Kate and son George as they were spotted rooting the home team on Sunday.