Bonucci, who was the hero of Italy’s Euro 2020 triumph, snubbed his Juventus teammate Ronaldo’s advice at the press conference to enjoy a Coca-Cola and a beer after his team’s memorable triumph. 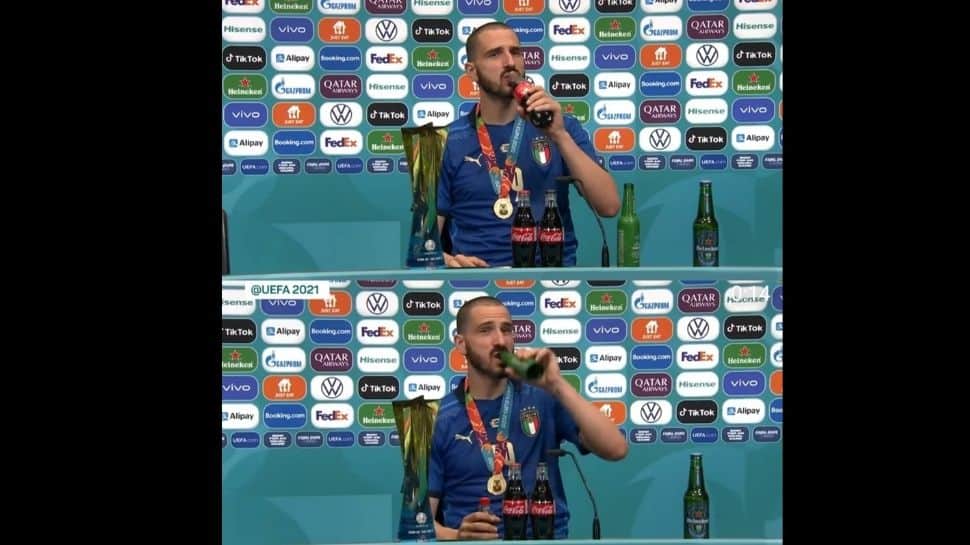 One of the biggest talking points of the just-concluded UEFA Euro 2020 was Portugal captain Cristiano Ronaldo’s snub to beverage giants Coca-Cola in a pre-tournament press conference. The one act by Ronaldo made a huge impact on the beverage giants stocks as Coca-Cola lost $4 billion in value with Ronaldo’s press conference video going viral. Ronaldo’s act was followed by France’s Paul Pogba, who kept Heineken bottles aside – due to religious reasons.

However, after Italy clinched the UEFA Euro 2020 title, after defeating England 3-2 in penalties at Wembley on Sunday (July 11), Leonardo Bonucci – the goal-scorer for Italy in the final – embraced Coca-Cola wholeheartedly unlike Ronaldo.

Bonucci scored in the 67th minute to cancel out Shaw's goal and help Italy level the score at 1-1 to force the game into extra time. None of the teams managed to find the back of the net in the extra 30 minutes as Italy outclassed England on penalties to clinch the trophy.

Bonucci, who was the hero of Italy’s Euro 2020 triumph, snubbed his Juventus teammate Ronaldo’s advice at the press conference to enjoy a Coca-Cola and a beer after his team’s memorable triumph. “I deserved this one didn’t I?” Bonucci said, while enjoying a beer at the presser.

He then went on to pick up a Coke bottle kept in front of him and drank from it before stating – ‘I’ll drink everything tonight’. Ronaldo had famously snubbed Coke at one of Portugal’s pressers and had urged everyone to drink water. His act had inspired several others to snub the soft drink at Euro 2020.

As per a report in The Daily Star, the prices of the beverage company dropped by 1.6 per cent and the value went down from $242 billion to $238 billion.

Battle of the bottles: A new trend emerges at #Euro2020 after Ronaldo's Coca-Cola snub https://t.co/9LGST6JSSD pic.twitter.com/Ozof4cgGQ1

Ronaldo, who also appears to be one of the most fittest athlete, is not a fan of the carbonated soft drinks and endorsed people to consume water instead. The video of the incident went viral in no minutes.