Brazil, seeking their fourth title overall and first since 2003, will now meet England in the first semifinals in Guwahati on October 25. 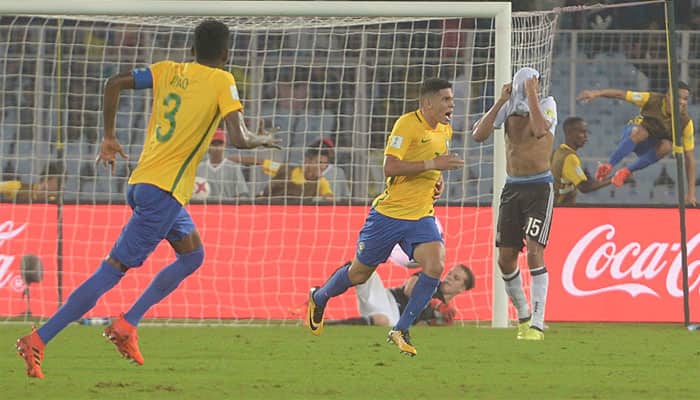 Kolkata: Three-time champions Brazil rallied from a goal down as they struck twice in the space of six minutes in a second-half blitz to beat Germany 2-1 in a thrilling match and enter the semifinals of the FIFA U-17 World Cup on Sunday.

Second half substitute Weverson and Paulinho scored in the 71st and 77th minutes respectively after Germany captain Jann-Fiete Arp had given his side the lead in the 21st minute by converting from the spot.

Brazil, seeking their fourth title overall and first since 2003, will now meet England in the first semifinals in Guwahati on October 25.

The full-to-the-brim Sal Lake Stadium was on the edge of a possible shock as Brazil were trailing 0-1 till the 70th minute before the match turned on its head with Weverson and Paulinho finding the German net in quick succession.

The overwhelmingly partisan Brazil-supporting crowd heaved a sigh of relief as the South American champions stayed on course of making it to the summit clash which will be played at the same venue on October 28.

Arp converted from the spot with a deft right-footer, sending Grabiel Brazao the wrong way to join France's Amine Gouiri and Mali's Lassana Ndiaye as the leading scorers with five goals.

Germany failed to build on the lead and Brazil coach Carlos Amadeu's masterstroke to bring Weverson after the changeover in place of an off-colour Luan Candido and changing the formation to 4-3-3 paid rich dividends.

Weverson made his presence felt as he capitalised on an attack initiated by Lincoln from the right as the Brazilian substitute's roaring left-footed shot brought on the equaliser.

Then it was the turn of Paulinho who blasted the back of the net six minutes later and that sealed their seventh semifinal berth and the first time since 2005.

Amid roars of 'Brazil, Brazil' from a capacity crowd of 66,630, the 'Selecao' found themselves at 'home' after the American referee Jair Marrufo signalled the kick-off.

Starting with a 4-2-3-1 formation, the Brazilians' deft footwork display with Paulinho's sheer brilliance from the midfield was like a treat of 'jogo bonito'.

They had the first attempt at the goal when Lincoln raided the Germany box but could not go past the goalkeeper Luca Plogmann.

Then, woodwork came to the rescue of Germany in the sixth minute when Alan's shot from a tight angle cannoned off the left post. The move initiated by Lincoln was Brazil's best attempt at the target in the first-half.

But Germany slowly took control of the proceedings and drew the first blood after Brazil's Luan Candido, who started in place of Weverson, lost the possession of the ball in a decisive 19th minute move.

John Yeboah initiated the attack before being fouled by Brazilian right back Alexander Nitzl to win a penalty.

Germany almost doubled the lead but Elias Abouchabaka's left footed shot missed the far post in the 26th minute. They brilliantly marked Brazilian ace playmaker Paulinho to hold to the slender lead into the break.

It was a neck-and-neck second half contest with Germany stepping up the tempo looking to double the lead as Brazil lived dangerously before taking on the battle.

First, it was Abouchabaka whose left-footer from inside the box was saved by the Brazil goalie while minutes later Josha Vagnoman's header from the centre of the box ballooned over the goal.

Brazil pushed hard for the equaliser and at the hour mark they had back-to-back chances with Lincoln going close in two successive attempts but Plogmann was upto the task.

Lincoln then missed an unchallenged header inside the Germany box.

In the 65th minute, Paulinho could not time it to perfection and missed to capitalise on a fine cross from Lincoln. But it was a matter of time before Brazil restored parity and nosed ahead with a strong crowd support behind them.