It was the first FA Cup meeting between the sides since 1979 when Wolves won a quarter-final replay and only the 11th time the clubs had met in competitive action. 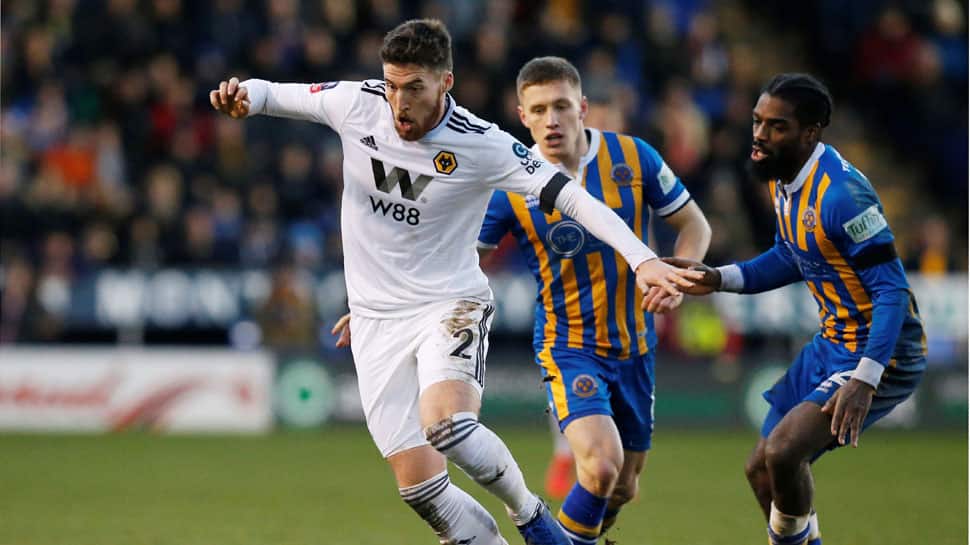 Wolverhampton Wanderers have bigger fish to fry than Shrewsbury Town these days having regained their Premier League status but on Saturday they avoided an FA Cup shock against the third-tier side by the skin of their teeth.

Shrewsbury, managed by former Wolves player Sam Ricketts, had led 2-0 after 70 minutes with goals from Greg Docherty and Luke Waterfall but Matt Doherty broke their hearts with a stoppage-time equaliser for Wolves.

For a club tucked away on the English-Welsh border, a home clash with Wolves counts as a `derby` with only 30 miles separating them -- and a visit from Nuno Espirito Santo`s cosmopolitan side, ensured a sizzling atmosphere at New Meadow.

It looked like being party time in the quaint market town with a second fifth-round appearance in three years within touching distance.

But after Raul Jimenez halved the deficit in the 75th minute, smashing home a cross from fellow substitute Ivan Cavaleiro it was backs to the wall for the Shrews.

A collective groan rang out when six minutes of stoppage time were added on, to the obvious annoyance of Ricketts, and it proved decisive as Doherty`s header spared Wolves`s blushes.

"It`s real mixed emotions. I base myself on performances and that was very, very good but I am disappointed not to win the game," Ricketts, who won the League One title as a player with Wolves in 2014, told the BBC.

"We were comfortable at 2-0 up, yes we are going to concede chances but we were comfortable. They are an excellent side, let`s not hide behind anything.Our players can take a lot from that. Neither side will have wanted a replay but we will have another game. Don`t write us off yet, we went to Stoke and won in a replay."

It was the first FA Cup meeting between the sides since 1979 when Wolves won a quarter-final replay and only the 11th time the clubs had met in competitive action.

Shrewsbury, 54 rungs below Wolves in the English football ladder, took the lead just after the halftime interval when Docherty converted from a tight angle after good work by Fejiri Okenabirhie and there was pandemonium in the ground when Waterfall nodded in a corner after 70 minutes.

Espirito Santo, whose side knocked out Liverpool in the third round, said it had been an "emotional" finish.

"Sometimes the games can be like this and require extra effort," he said. "They were well organised, they fought and were really competitive.The schedule is tight and the replay will be tough."