Mumbai City FC found their winning ways again at home as they notched up a 1-0 victory over Chennaiyin FC to leapfrog into the fifth position in the Indian Super League football here today. 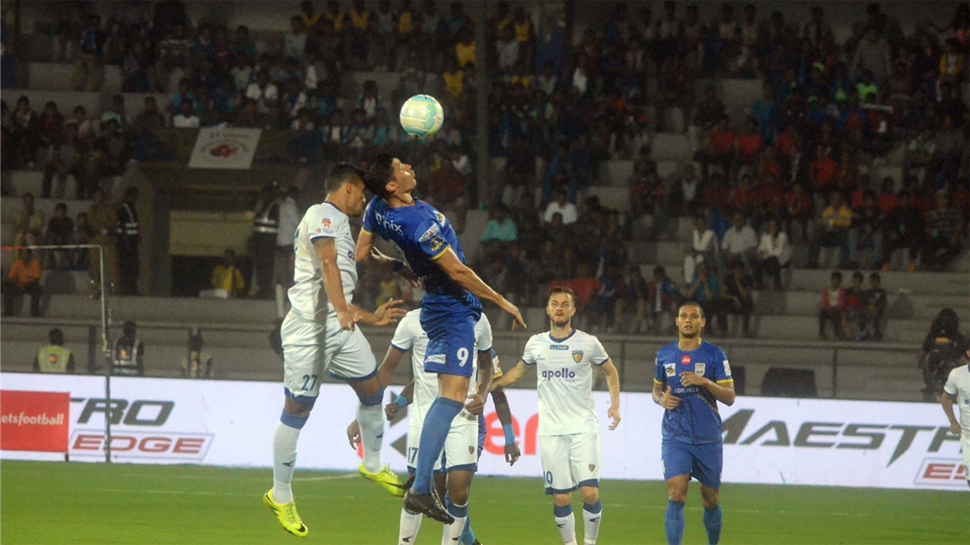 Mumbai: Mumbai City FC found their winning ways again at home as they notched up a 1-0 victory over Chennaiyin FC to leapfrog into the fifth position in the Indian Super League football here today.

Seasoned Cameroonian Achille Emana scored the only goal of the rough and tough game played at the Mumbai Football Arena in suburban Andheri as he coolly slotted home from the penalty spot on the hour.

The spot-kick was awarded when Balwant Singh was brought down just inside the box on the left corner by Chennaiyin defender Mailson Alves, a decision that was disputed hotly by the visiting team's players who felt the foul had occurred just outside the 18-yard area.

But the referee was unconvinced and Emana, easily the most visible on the field of play from either side, calmly slotted home to the left corner of the goal even as Chennaiyin FC goalie Karanjit Singh dived the other way.

The victory was the second for Mumbai, both coming at home and took their points tally to 7 from 5 games and into the fifth spot on the table just ahead of Jamshedpur FC.

Chennaiyin remained on third spot with nine points after suffering their second loss in five matches.

While Mumbai will remain at home to play against ATK, Chennai travel to Bengaluru to meet BFC, with both the games scheduled on December 17.

Chennaiyin did not have star striker Jeje Lalpekhlua in the starting eleven and Mohd Rafi was left to do the job in which he failed miserably.

Jeje has scored two goals in four games before today and this proved to be a costly error on the part of manager John Gregory as Rafi missed some gilt-edged chances in the first half before he was replaced by Jeje in the 67th minute.

Both sides started off in a cautious fashion before opening out in the last fifteen minutes of the opening half which was well contested.

Chennaiyin got a chance to score at the stroke of half an hour was coming up but Rafi somehow failed to connect on the run a superb high cross into the six-yard box sent from the left by Jude Nworoh.

The first clear try at the goal had come from the Mumbai ranks 15 minutes into play when Everton Santos headed goalward to be easily collected by Chennaiyin goalie Karanjit Singh off a left cross from Gerson Viera.

Two minutes after the miss by Rafi, Mumbai had a good chance to go in front but Rafa Jorda shot wide, on being challenged by a couple of rival defenders, after he was fed beautifully with a low diagonal pass from the left by the hard-working Emana.

Just at the stroke of half-time, Rafi's header, off a cross from the right by Thoi, was blocked well by Mumbai goalie Amrinder Singh.

Crossing over, Rafi once again missed scoring with his left foot when he was fed a superb through ball by Slovenian teammate Rene Mihelic that Mumbai goalkeeper Amrinder blocked and the rebound was booted wide by Thoi Singh to the disappointment of the visiting team.

Thoi was foiled later by Amrinder who covered the narrow-angle easily and then came the match-winner for Mumbai through the penalty award.

Rafi could have got the equaliser soon afterwards but headed wide from inside the small box, and it was no surprise when he was replaced by Jeje who couldn?t do much in the remainder of the game.

With Chennai pressing hard for the equaliser, Mumbai got the chance to hit on the counter and could have scored twice but for Jorda failing to beat the rival goalie in one on one situations.

Five players were booked in the game by the referee for rough play, Davinder Singh, his Mumbai side captain Lucian Goian and Sehnaj Singh along with the visiting side's Inigo Calderon and Mailson.