Barca lead the La Liga standings on 50 points after 22 games, Atletico are second with 44 while third-placed Real Madrid, who play at home to Alaves later on Sunday and visit Atletico next week, have 39. 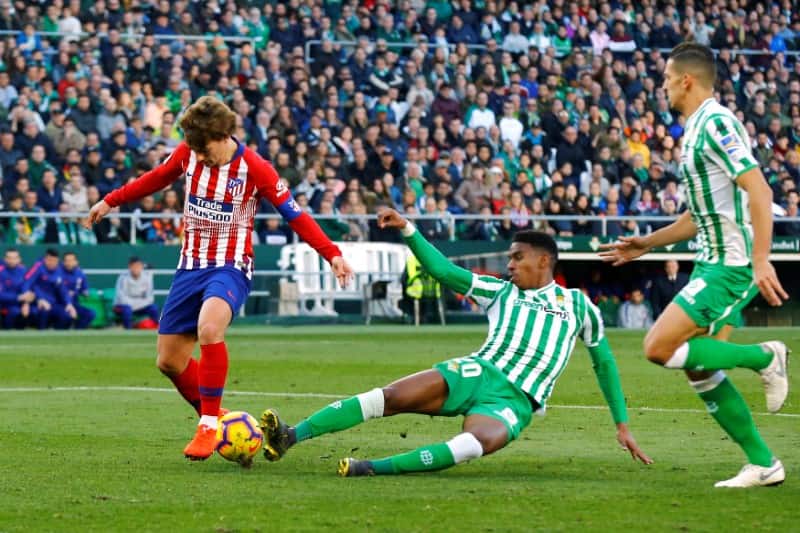 Atletico Madrid fell to their first La Liga defeat in five months as they were beaten 0-1 at the hands of Real Betis on Sunday, missing a golden chance to close the gap with leaders Barcelona and slipping six points adrift of the Catalans.

Alvaro Morata made his debut for Atletico after completing a loan move from Chelsea, but it was another former Real Madrid player in Sergio Canales who made the difference.

He scored a penalty midway through the second half to give Betis a victory which took them up to sixth in the table.

Atletico coach Diego Simeone was without five regular starters but was still able to field what looked to be an exciting, attacking lineup with pacey wingers Angel Correa and Thomas Lemar and Morata partnering the talismanic Antoine Griezmann up front.

Barca`s 2-2 draw with Valencia a day earlier had given Atletico the opportunity to move within three points of their title rivals yet they struggled to get a hold on the game, and it took a spectacular save from Jan Oblak to prevent Zouhair Feddal heading Betis in front midway through the first half.

Filipe Luis gave away the penalty which decided the game, striking the ball with his left arm as he attempted to chest it down, and although Oblak dived the right way, Canales` spot-kick was too powerful for the Slovenian to reach.

Barca lead the standings on 50 points after 22 games, Atletico are second with 44 while third-placed Real Madrid, who play at home to Alaves later on Sunday and visit Atletico next week, have 39.

"We cannot be happy as we failed to close the gap with Barca. It was a very even game, but we can`t afford to dwell any more on this, we have to think about our next game immediately," said Atletico defender Juanfran.

"No-one here is going to give up because there`s still a long way to go in the season."

Atletico had a penalty appeal of their own late in the game when Morata went down under a challenge from Feddal, while Griezmann went closest to scoring for the visitors when he hit the post after the interval.

Atletico had 13 shots at Pau Lopez`s goal, but only managed to hit the target once, losing for the first time in the league since going down to a 2-0 defeat at Celta Vigo on Sept. 1.

"Both teams had few chances and we couldn`t find a solution as the minutes ticked down," said Simeone.

"Morata had a good game considering it was his first game and we hope he will be able to contribute more to the team the longer he spends with us. I`m trying to be optimistic, at least we are only six points behind as Barca drew, and the distance could have been bigger," he added.