La Liga: Barcelona made to sweat for draw by impressive Athletic Bilbao

Barca top the La Liga standings with 51 points after 23 games, six ahead of a resurgent Real Madrid. 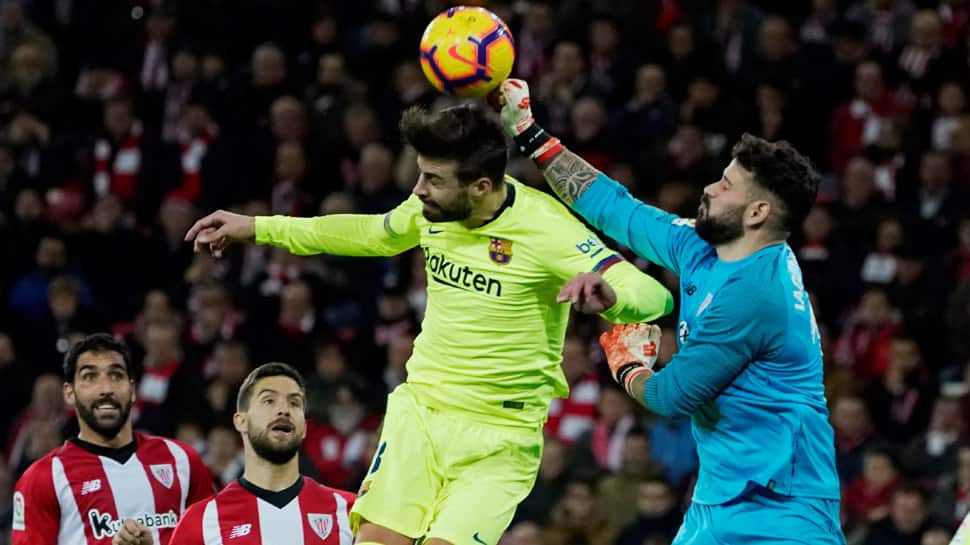 La Liga leaders Barcelona handed Real Madrid more hope in the title race as they drew 0-0 against Athletic Bilbao on Monday, only avoiding defeat thanks to some outstanding saves by Marc-Andre ter Stegen.

The Germany keeper twice thwarted forward Inaki Williams and kept out a stinging drive from Markel Susaeta in an intense and entertaining game in which, the champions came under heavy pressure throughout.

Barca top the standings with 51 points after 23 games, six ahead of a resurgent Real Madrid.

The impressive hosts were left frustrated by the sending off of Oscar de Marcos in added time for a second yellow card, but there was barely any time left for Barca to take advantage and they had to settle for a second straight league stalemate after last week's 2-2 draw at home to Valencia.

Barca coach Ernesto Valverde was still upbeat about his side's position in the title race, even though in the last nine days they have dropped four points.

"We come out of this week just like the last, we are still top, and if my calculations are not wrong, we'll be top next week. This is a long season and we have to be top at the end of it," he told a news conference.

The home side, hurting after a limp defeat by local rivals Real Sociedad in their last outing and with a heaving San Mames stadium willing them on, made an intense start and took the game to the champions.

Ter Stegen was first called into action by a long-range strike from Susaeta, the German flying towards the top right corner to tip the ball over the bar with his left hand.

He then stood form to keep out an overhead kick from Raul Garcia and was alert in the second half, instinctively throwing an arm into the air to pat away a close-range shot from Williams and later stretching to catch a shot from the forward.

Messi, who began Thursday's 1-1 draw at home to Real Madrid in the Copa del Rey semi-final first leg on the bench, was Barca's most dangerous outlet despite his obvious fitness issues.

He came closest to scoring for the visitors, sending a loose ball on to the top of the crossbar after Bilbao keeper Iago Herrerin fumbled on the edge of the area.

"Leo is fine, he played feeling 100 percent, we may have had difficulties, but the fact he played means he was ready," added Valverde, after his assistant Jon Aspiazu had said before the game that the Argentine was not yet fully fit.

Barca enjoyed more control in the second half after homegrown midfielder Carles Alena replaced an erratic Arturo Vidal but tired as the game progressed.

Bilbao looked far likelier to break the deadlock in the closing stages but were repeatedly shut out by the intimidating presence of the impressive Ter Stegen.

"We had the clearer chances, we had more shots and more corners and if anyone came closer to winning the game it was us," said Athletic coach Gaizka Garitano, whose side moved up to 13th in the standings.