La Liga: Getafe slip out of top-four despite draw against Real Valladolid

Getafe`s veteran striker Jorge Molina grabbed a valuable point by scoring from a fiercely-contested penalty in the fourth minute of stoppage time. 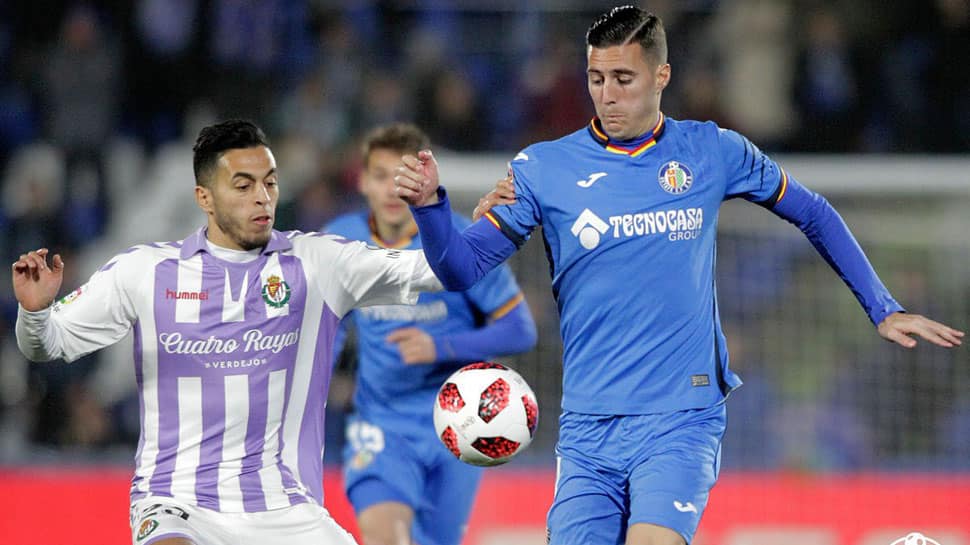 Getafe missed the chance to return to La Liga`s top-four despite snatching a 2-2 draw away to struggling Real Valladolid on Sunday in a thrilling encounter that included a red card, a serious injury, two disallowed goals and a last-gasp equaliser.

Getafe`s veteran striker Jorge Molina grabbed a valuable point by scoring from a fiercely-contested penalty in the fourth minute of stoppage time.

The draw, however, left the Madrid side outside of the Champions League spots in fifth on 51 points with six games remaining, one point behind Sevilla who climbed into fourth by beating Real Betis 3-2 on Saturday.

Uruguayan midfielder Mauro Arambarri had given Getafe the lead in the 14th minute with a superb long-range strike but Valladolid striker Sergi Guardiola levelled against his former team in the 29th with an unorthodox finish off his thigh.

Getafe`s Portuguese defender Vitorino Antunes had to be taken off at the end of the first half in serious pain from a suspected knee injury, and the visitors` fortunes worsened in the second half when Mathias Olivera was sent off for a second booking.

Valladolid grew in confidence and after they had a goal ruled out for offside, Turkish striker Enes Unal scored from the penalty spot to give them the lead.

Valladolid forward Waldo looked to have made it 3-1 but his goal was also ruled out for offside following a VAR review, while the technology was later used to ratify Getafe`s late penalty for a push by Oscar Plano on Hugo Duro.

The draw kept up Getafe`s unlikely pursuit of Champions League football while harming Valladolid`s hopes of avoiding relegation, leaving them hovering above the drop-zone in 17th place.