Sevilla tumbled down to seventh on 10 points after six games, while Eibar climbed up from second-bottom to 16th on five. 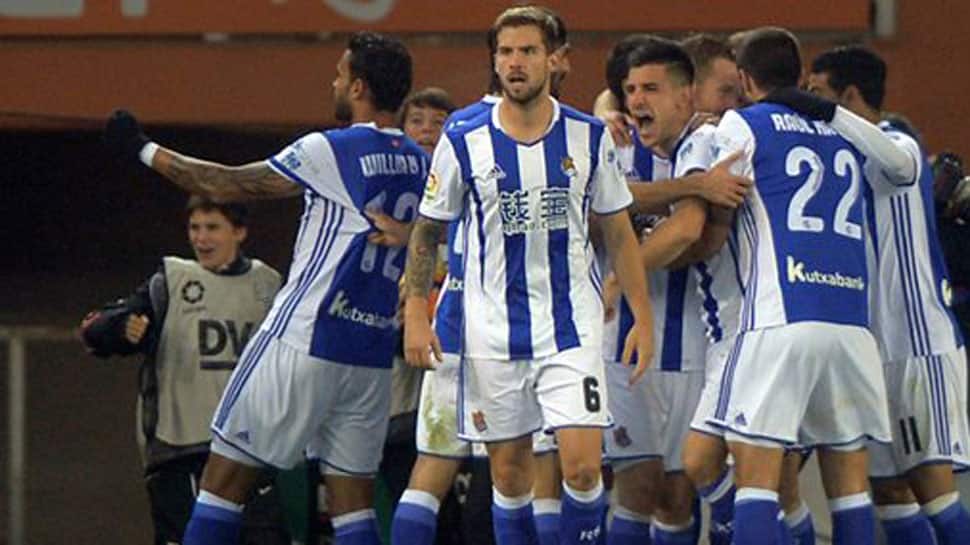 A rampant Real Sociedad moved up to second place in La Liga after easing to a 3-0 win at home to Alaves on Thursday for a third consecutive league win, while Sevilla threw away a two-goal lead in the second half to lose 3-2 away to Eibar.

Sociedad scored all their goals in a dominant first-half display, taking the lead in the 19th minute through Mikel Oyarzabal, who calmly tucked an exquisite through ball from Martin Odegaard into the net with a deft touch.

Spain international Oyarzabal turned provider for the second goal, whipping in a cross from the left wing which Willian Jose met with a diving header to score in the 32nd.

Oyarzabal made it 3-0 from the penalty spot, while Alaves` difficult evening was compounded when Manu Garcia was sent off for a second booking in the 85th minute.

Sociedad are second in the standings with 13 points after six games, one behind leaders Real Madrid. Alaves are 17th on five.

Sevilla looked set to go second provisionally when they took a 2-0 lead into them at halftime at Eibar, but the Basque minnows pulled off a stunning fightback to earn a first win of the season.

Argentine winger Lucas Ocampos put Julen Lopetegui`s Sevilla ahead in the 11th minute by firing through the legs of goalkeeper Marko Dmitrovic and Spaniard Oliver Torres gave them a two-goal cushion by nudging the ball home in the 33rd.

Eibar pulled themselves back into contention midway through the second half with a penalty from Chilean winger Fabian Orellana and turned the game on its head with two strikes in the space of five minutes.

Pedro Leon cashed in on a disastrous mix-up between Sevilla goalkeeper Tomas Vaclik and team mate Diego Carlos to equalise in the 77th before defender Cote hit the winner from a free kick.

Sevilla tumbled down to seventh on 10 points after six games, while Eibar climbed up from second-bottom to 16th on five.