With the first nine penalties all converted, Chelsea striker Tammy Abraham saw his effort blocked by the legs of Liverpool keeper Adrian to hand victory to Jurgen Klopp`s side in the annual clash between Champions League and Europa League winners. 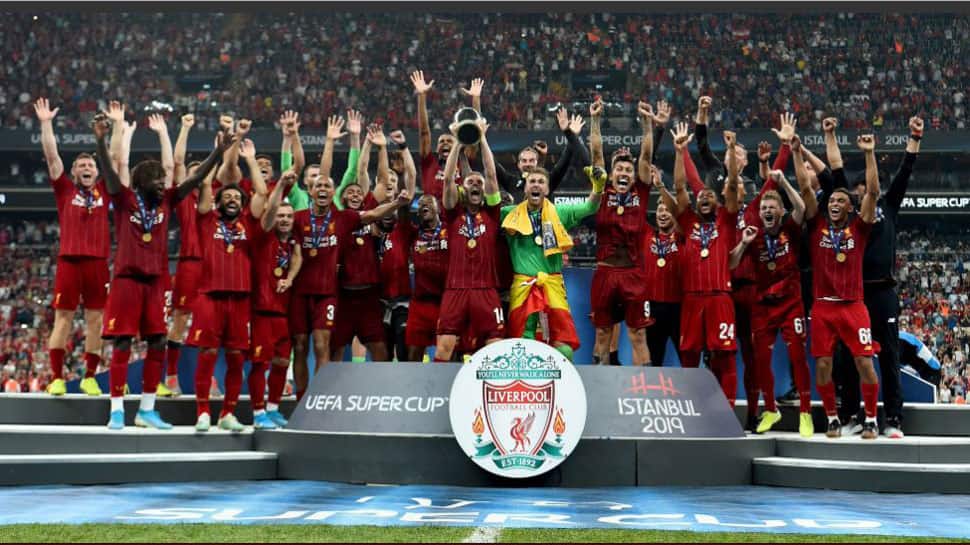 Champions League winners Liverpool won the Super Cup 5-4 on penalties against Chelsea on Wednesday after the game ended 2-2 following extra-time.

With the first nine penalties all converted, Chelsea striker Tammy Abraham saw his effort blocked by the legs of Liverpool keeper Adrian to hand victory to Jurgen Klopp`s side in the annual clash between Champions League and Europa League winners.

It was a memorable moment for the Spanish goalkeeper who only joined the club nine days ago and found himself thrust into the side following the injury to first-choice Alisson Becker in the Premier League opener against Norwich City on Friday.

"Welcome to Liverpool! It`s been a crazy week," said the former West Ham keeper, signed as a free agent as a back-up.

"I`m really happy for the team, I`m happy to play for Liverpool and happy for the fans. It was a long game but in the end a great finish for us."

Liverpool, who beat Tottenham Hotspur in June`s Champions League final, have now won the trophy on four occasions while Chelsea have lost their last three appearances in the match.

While the Super Cup does not carry anywhere near the prestige of either of UEFA`s two season-long competitions, the first-ever all-English affair was a good quality encounter played in hot, muggy conditions.

Chelsea went ahead in the 36th minute when N`Golo Kante drove from midfield and found Christian Pulisic, who turned inside and delivered the perfect through ball for Olivier Giroud to confidently slot home.

American Pulisic then beat Adrian with a fine shot after a swift run down the flank but the effort was ruled out for offside.

Liverpool manager Klopp introduced Brazilian Roberto Firmino at the break and he had an instant impact, poking the ball past the advancing Kepa Arrizabalaga and Sadio Mane tapped into the unguarded goal to make it 1-1 in the 49th minute.

Arrizabalaga then produced a superb double save in the 75th minute to deny Mohamed Salah`s deflected low drive and the Spanish keeper did superbly to get back up and push Virgil van Dijk`s follow up against the bar.

Mason Mount had another Chelsea effort ruled out for offside leaving the teams level after 90 minutes and forcing extra-time, past midnight local time, and Liverpool struck after just five minutes with Mane driving home after an excellent exchange with Firmino.

But six minutes later, Chelsea were back on level terms with a Jorginho penalty after Abraham was brought down in the box by Liverpool keeper Adrian and French referee Stephanie Frappart, the first woman to officiate a major men`s European final, pointed to the spot.

Frank Lampard`s side went close to winning the game with Mount forcing a good save out of Adrian and then Pedro driving just wide -- but with the scores level after 120 minutes the game went into the shootout.

Although Chelsea ended the game in defeat, Lampard, who took over as manager in July following the departure of Maurizio Sarri, will be encouraged by a positive display after his lost their opening Premier League game 4-0 at Old Trafford.

"I`ve got nothing but pride in the team and the performance, and confidence in what that means," said the former England midfielder.

"After Sunday, tonight was another level, and we were unlucky not to win. We`ve got three games now till the international break and we`ll try to win them all," he said.

Klopp was delighted with the win but aware that his side had come through a demanding game.

"It was a very difficult game for both teams. It was all about winning it and we did that in the end," he said.

"Nobody in the stadium wanted extra-time, it was a killer. I`m not sure about the penalty but who cares now. We had to fight and the boys did tonight."