Former Liverpool player Raheem Sterling gave the English champions the lead in a first half they dominated as Liverpool`s sluggish pre-season form continued. 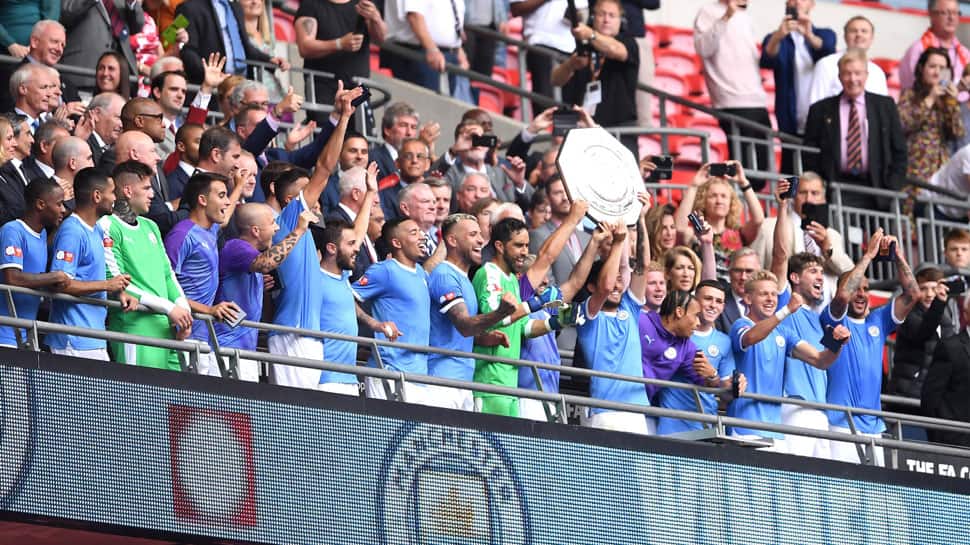 Manchester City struck an early blow for the forthcoming Premier League campaign as they beat 5-4 Liverpool on penalties to win the Community Shield at Wembley on Sunday after an absorbing contest had finished 1-1.

Former Liverpool player Raheem Sterling gave the English champions the lead in a first half they dominated as Liverpool`s sluggish pre-season form continued.

But European champions Liverpool were quicker and sharper in the second period.

They equalised through Joel Matip`s header and created a host of other chances to take the lead as City appeared to tire.

City`s Kyle Walker made a last-ditch goal-line clearance from Mo Salah`s effort in the dying moments and with no extra time being played the showpiece went to a penalty shootout.

Pep Guardiola`s side, who completed an unprecedented domestic treble last season after also winning the Community Shield curtain-raiser, scored all five of their spot-kicks.

Claudio Bravo`s save from Liverpool`s second penalty, struck by Georginio Wijnaldum, proved decisive as City once again displayed their appetite for the big occasion.

"It`s the first trophy you can win, for me growing up this was a big one, it starts off the season and hopefully we can replicate what we did last season," Walker said.

"It`s too early to say, there`s a lot of good teams in this league but hopefully we can be up there or thereabouts."

While neither manager will attach much significance to the outcome of Sunday`s game, it was still a useful barometer of where both teams are, ahead of next weekend`s big kickoff.

Sunday`s evidence would suggest they will again be going toe-to-toe after City edged Liverpool by 98 points to 97 in winning last year`s epic title-race.

"The second half was a really good performance, really powerful," Liverpool boss Jurgen Klopp, who fielded nine of the 11 who started June`s Champions League final against Tottenham Hotspur, said.

"I cannot be disappointed today. The performance was much more important today than a win. Now we know we are still here."

Community Shield clashes often have a `glorified friendly` feel but, with huge numbers travelling south on Sunday, there was a raucous atmosphere in the stadium.

There was also enough edge in the game to see Guardiola booked on the touchline, and the way City`s players celebrated when Gabriel Jesus, who had replaced Leroy Sane after 13 minutes, slotted the winning penalty spoke volumes for the mentality in City`s squad.

With David Silva and Kevin de Bruyne outstanding in the first half, City were all over Liverpool early on and Sterling scored his first goal against his old club in the 12th minute, squeezing a shot under Alisson from Silva`s clever flick.

Liverpool, beaten by Borussia Dortmund, Sevilla and Napoli in pre-season games, shrugged off their lethargy in the second half. Virgil van Dijk struck the underside of the bar, with goal-line technology showing the ball has not crossed the line. Salah then fired against the post.

Sterling also struck the woodwork for City and wasted another chance when through on goal.

But Liverpool deservedly levelled in the 77th minute when Van Dijk dinked a ball into the area for his defensive partner Matip to head home.

Salah had two great chances to seal it after errors from Oleksandr Zinchenko but Bravo and Walker came to City`s rescue to send the match into penalties.

Liverpool begin the Premier League season on Friday at home to newly-promoted Norwich City while City begin their quest for a third consecutive title away to West Ham United.