Aymeric Laporte headed the opener just before the interval and substitute Gabriel Jesus sealed the victory deep in stoppage time for City, who returned to the league`s summit for the first time since Dec. 8. 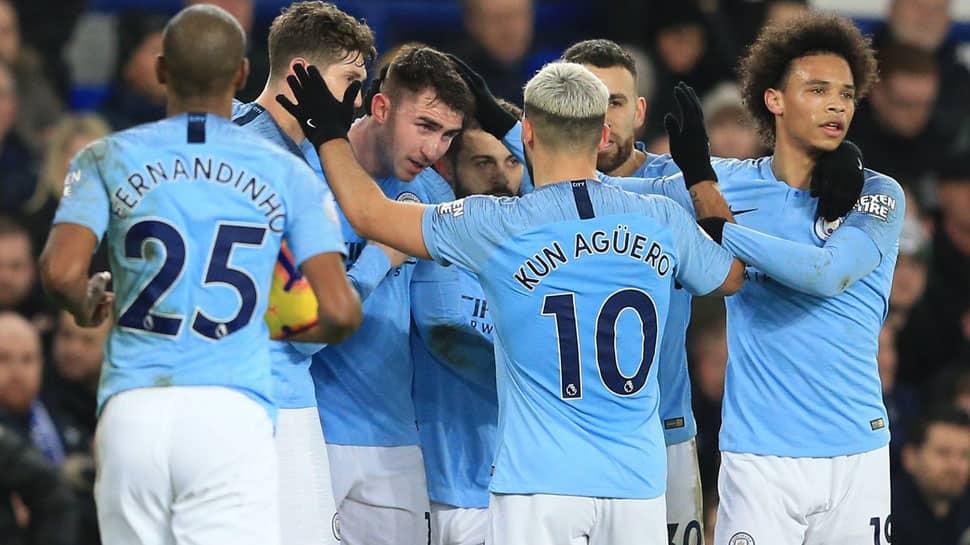 Champions Manchester City went top of the Premier League with a disciplined 2-0 win over Everton at Goodison Park on Wednesday that saw them leapfrog Liverpool on goal difference.

Aymeric Laporte headed the opener just before the interval and substitute Gabriel Jesus sealed the victory deep in stoppage time for City, who returned to the league`s summit for the first time since Dec. 8.

Both City and Liverpool have 62 points, but Pep Guardiola`s side have played one game more than the Merseysiders, who have drawn their last two encounters and host Bournemouth on Saturday.

With Tottenham Hotspur on 57 points, the title race has turned into a genuine three-way tussle and while City rarely sparkled against Everton, it was a key win in a busy week in which they had already beaten Arsenal and host Chelsea on Sunday.

"Four or five days ago we could have been seven points behind, it is a lesson to never give up," said Guardiola.

"Now we have an incredible test on Sunday against Chelsea. I don`t know how far we will get, maybe we will die in the road, but we are trying.

"We have played one more game than Liverpool, it`s good to be top but Liverpool (still) has a game at Old Trafford," he added, referring to Liverpool`s match at Manchester United on Feb. 24.

The game against Everton was a re-arranged fixture caused by City`s advance to the League Cup final and highlighted the difficulties to come for a side still involved in four competitions as there were some signs of weariness in their display.

Everton manager Marco Silva left two of his main creative players, Gylfi Sigurdsson and Richarlison, on the bench and opted for three central midfielders -- a tactic that worked well as his side closed down City and limited their control of possession.

Yet after all that good work, it was Everton`s sloppiness at set-pieces which cost them yet again.

David Silva curled in a free kick from the left and Laporte was somehow left unattended to head home from close-range.

The goal was the 17th conceded by Everton from a set-piece in all competitions this season -- prompting further questions about Silva`s insistence on zonal marking.

After the break ninth-placed Everton, who had been well beaten at home by Wolves on Saturday, stuck at their task well, but for all their graft they rarely threatened City`s lead.

The home side did get a sniff of an opening when Kyle Walker, deep in his own half, gave the ball away to substitute Richarlison, but the Brazilian`s pass towards Cenk Tosun was over-hit and the danger passed.

It was a sign of City`s strength in depth that their substitutes combined for the second goal deep in stoppage time with Kevin De Bruyne playing Jesus in on goal.

Although the Brazilian`s shot was blocked by Everton keeper Jordan Pickford, he reacted quickly to head home the loose ball.

"We know that it is going to be difficult. We want to play well in every game and at the end of the season we want the title," he said.