United, who were without injured French internationals Paul Pogba and Anthony Martial, were far from convincing but manager Ole Gunnar Solkskjaer was delighted they secured their second win of the campaign to reach eight points from five games. 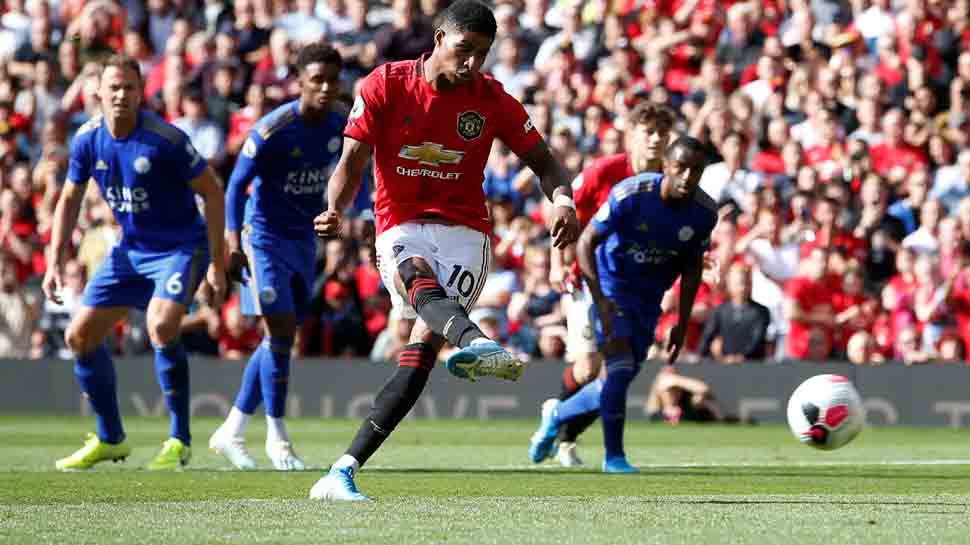 Manchester United moved up to fourth place in the Premier League after a Marcus Rashford penalty gave them a 1-0 win over Leicester City at Old Trafford on Saturday.

United, who were without injured French internationals Paul Pogba and Anthony Martial, were far from convincing but manager Ole Gunnar Solkskjaer was delighted they secured their second win of the campaign to reach eight points from five games.

After Andreas Pereira had forced Leicester keeper Kasper Schmeichel into action with a powerful free kick, United got ahead in the eighth minute.

Rashford, chasing down a loose ball in the area, went down under a challenge from Leicester`s Turkish defender Caglar Soyuncu and referee Martin Atkinson pointed to the spot.

United had missed their two previous penalties this season, including Rashford`s failure against Crystal Palace last month, but the England forward made no mistake this time.

Leicester`s best effort of the opening half was a dipping drive from Ben Chilwell, which David De Gea tipped over.

United produced very little after the break, apart from a dangerous effort from Dan James from distance, but while Leicester had the better of the ball, Brendan Rodgers` side struggled to find real openings.

Scott McTominay was the stand-out United player while fellow midfielder Dutchman Tahith Chong made another positive impression off the bench in the final 20 minutes.

Rashford went closest to adding to the score with a curling free kick which hit the bar seven minutes from time but Solskjaer was pleased with the resilience his team showed after a run of three league games without a win.

"We hung in there. It was the first time this season where we have had to defend for large periods. We have dominated the other games but today we saw a (United) team that could defend in their own half," said the Norwegian.

"They (Leicester) are a good side who want to get into the top four. To keep a clean sheet is great but let`s not get too excited because we know we can play better. We defended as a proper team," he added.

Leicester boss Rodgers felt his side had merited more.

"I thought we deserved something from the game. We didn`t start well but we had a great chance to take the lead," he said.

"We gave away a soft penalty and that ultimately decided the game. In the second half, we played well and it looked like it was coming but we couldn`t find that last pass."

Serie-A: Juventus escape with a point from trip to much-improved Fiorentina