Try telling Padraig Amond, Shaquile Coulthirst or Callum Lang -- an unlikely trio of footballing journeymen -- that the FA Cup has lost its lustre. 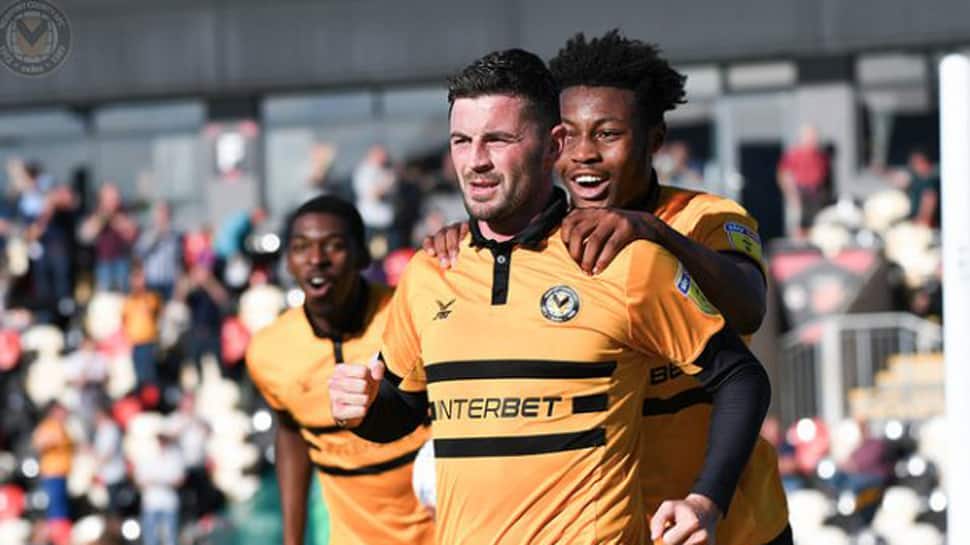 Try telling Padraig Amond, Shaquile Coulthirst or Callum Lang -- an unlikely trio of footballing journeymen -- that the FA Cup has lost its lustre.

Or, for that matter, try persuading any of the followers of Newport County, Barnet and Oldham Athletic, who all rejoiced in their classic giant-killing feats on Sunday, that the grand old competition has mislaid its power to amaze and delight.

The Cup will, once again, likely be won by one of the Premier League`s big guns in May but the traditional third round weekend at the turn of the year offered a timely reminder of why it remains close to the heart of English fans.

After minor league Barnet had stunned four-time winners and Championship side Sheffield United 1-0 away with Coulthirst`s penalty and fourth-tier Oldham beat top-flight Fulham 2-1 with Lang`s late header, the best was saved until last.

For at Newport`s rocking Rodney Parade, Amond`s 85th-minute penalty sealed an unforgettable 2-1 win over fairytale 2016 English champions Leicester City. The humble Welsh club, former UEFA Cup quarter-finalists, have endured a chequered history and went bust in 1989, only to reform and climb back slowly from the lowest ranks of minor league football.

Two seasons ago, they appeared certain to slip back out of League Two into obscurity but under manager Michael Flynn, who took over with them 11 points adrift at the bottom, have been transformed and now own a place in FA Cup folklore.

The club known as The Exiles after being forced to play home matches across the border from 1989 to 1994, came close last year when another Amond goal took them to within eight minutes of beating Tottenham Hotspur at Rodney Parade before Harry Kane equalised and Spurs won the replay 2-0.

This time, the Irishman Amond made sure Newport would not be denied as he tucked away a nerveless penalty, shortly after Leicester`s Rachid Ghezzal`s piledriver cancelled out Jamille Matt`s early headed opener for the hosts.

Newport survived the anxious final minutes to record their first win over a top-flight club since beating Sheffield Wednesday in the third round in 1963-64.

"It`s huge, it`s massive for the club to be in the fourth round again and to get some much-needed finances," said Flynn, who joined his players tucking into box loads of peri peri chicken delivered to the home dressing room. "To see the number of supporters out there and produce that for the fans is amazing. We`ve just gone and beaten the Premier League champions from two years ago. It`s unbelievable. It`s not sunk it yet. I can feel my phone buzzing now and it`s non-stop."

Once Marc Albrighton`s absent-minded handball in the box had opened the door to glory after Ghezzal`s strike had seemingly slammed it shut, Amond had the coolest head in the stadium when stepping up to convert the penalty.

The 30-year-old, whose career has taken him from Shamrock Rovers to Newport via the outposts of Grimsby Town, Accrington Stanley, Morecambe and Hartlepool United, rolled the ball straight down the middle to send the crowd into raptures.

"It`s a penalty, so you`re expected to score. I played with (Leicester keeper) Danny Ward at Morecambe, he faced a few of my penalties in training so I was hoping he wouldn`t remember," Amond said. "It`s brilliant to score the winner but just to win is the big one. Everyone`s done brilliantly today."

With Oldham winning at former Leicester manager Claudio Ranieri`s Fulham, it was the first time since 1989 that two top-flight sides had been knocked out of the FA Cup by teams from the fourth tier or below on the same day.

On that occasion, Middlesbrough were beaten by Grimsby (fourth tier) and Coventry City lost to Sutton United (minor league).