Wenger sprang a major surprise by leaving Alexis Sanchez on the bench and the Chile forward was badly missed as Arsenal were blown away in the first half at Anfield. 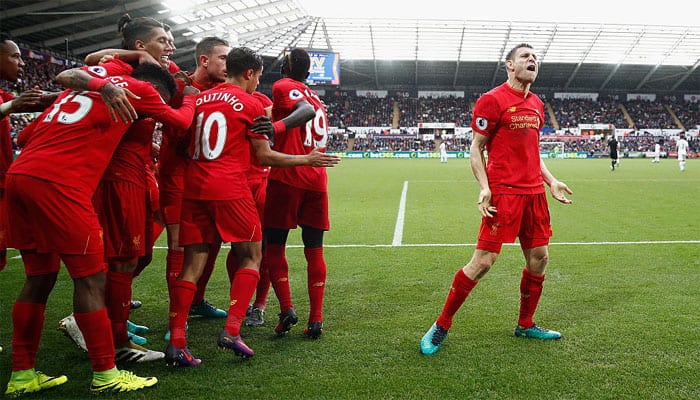 Wenger sprang a major surprise by leaving Alexis Sanchez on the bench and the Chile forward was badly missed as Arsenal were blown away in the first half at Anfield.

With Mesut Ozil also absent, due to illness, Arsenal were ill-equipped to match Jurgen Klopp`s fired-up side, who took the lead in the ninth minute when Roberto Firmino met Sadio Mane`s cross with a cool finish at the far post after sloppy Arsenal defending.

There was worse to come for Wenger in the 40th minute as Firmino teed up the unmarked Mane and the Senegal winger drilled his shot past Petr Cech.

Wenger sent on Sanchez at half-time and inevitably he made an impact, sending an astute pass through to Danny Welbeck, whose deft chip reduced the deficit in the 57th minute.

But Georginio Wijnaldum finished a lethal Liverpool counter attack in the 90th minute to condemn Arsenal to a third defeat in their last four league matches.

Liverpool`s second win in their last eight league games lifted them above Arsenal and Manchester City into third place."It was one of the best games we`ve played because of the strength of the opponent," Klopp said.

Wenger`s fifth placed side are now two points outside the top four and that gap will grow to five if City beat Sunderland on Sunday.

"I felt the strikers suffered in the first half and we didn`t dominate in the midfield. It is always debatable," Wenger said when asked if the Sanchez move had backfired.

At Old Trafford, Mings appeared to stamp on Ibrahimovic`s head with his left foot as he jumped over him late in the first half and the Swedish striker seemed to elbow him in retaliation moments later.

Ibrahimovic, who also squandered a penalty, told BBC Sport: "You have the TV, you can see the images. I jump up and jump high and he (Mings) jumps into my elbow. It is not my intention to hurt someone."

Marcos Rojo put United ahead in the 23rd minute at Old Trafford, but Joshua King levelled from the spot five minutes before half-time following a foul on Marc Pugh by Phil Jones.

Adam Smith`s handball gave Ibrahimovic a chance to restore United`s lead from the penalty spot, but his spot-kick was brilliantly palmed away by Bournemouth goalkeeper Artur Boruc.

Victory would have taken United into the Champions League places, but they remain sixth, a position they have occupied since November.

Ibrahimovic was already on a booking when he tangled with Mings, but both players avoided punishment, raising the prospect of violent conduct charges from the Football Association.

The standard punishment for violent conduct in the Premier League is a three-game ban.

Mings, whose side remain 14th, said the contact with Ibrahimovic had been accidental.

"I would never do that. That`s not in my game," Mings said. "Hard and fair is how I like to tackle, but off-the-ball stuff like that isn`t part of my game.

"Referee Kevin Friend also sent off Bournemouth`s Andy Surman for two bookable offences, although he had to be reminded by United left-back Luke Shaw that the midfielder had already been booked.

Elsewhere, champions Leicester continued their smooth adaptation to life after Claudio Ranieri by winning 3-1 at home to fellow strugglers Hull to pull five points clear of the relegation zone.

The champions beat Liverpool 3-1 last Monday in their first game since the sacking of popular manager Ranieri and caretaker coach Craig Shakespeare saw them record back-to-back wins for the first time since last April.

Sam Clucas gave Hull a 14th-minute lead, but Leicester stormed back to win through strikes from Christian Fuchs and Riyad Mahrez and a Tom Huddlestone own goal.

"Results give players confidence," said Shakespeare. "Back-to-back wins will give confidence for the last 11 games of the season.

Hull are now four points from safety and they were joined in the bottom three by Middlesbrough, who fell to two Marko Arnautovic goals in a 2-0 defeat at Stoke City.

Crystal Palace moved three points clear of danger with a 2-0 success at West Bromwich Albion, while Southampton won 4-3 at Watford.