Premier League: Watford battle back to salvage draw against Arsenal

Victory would have put Arsenal into third place but they ended the day seventh in a cluster of clubs on eight points. 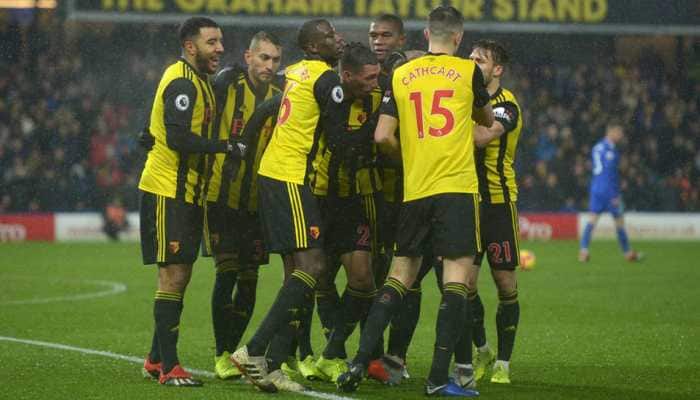 Arsenal squandered a two-goal lead as Watford hit back to draw 2-2 in new manager Quique Sanchez Flores`s first game of his second stint in charge at Vicarage Road on Sunday.

Flores`s return following the dismissal of Javi Gracia after four games of the Premier League season seemed to be going flat as Pierre-Emerick Aubameyang struck twice for Arsenal in the first half.

But Tom Cleverley halved the deficit in the 53rd minute after an Arsenal mix-up and Watford were rewarded for a much-improved display when substitute Roberto Pereyra converted an 81st-minute penalty awarded for a foul on him by David Luiz.

Watford came agonisingly close to winning it with Gerard Deulofeu curling just wide and then Abdoulaye Doucoure having a stoppage-time shot saved by Bernd Leno after a counter-attack.

Victory would have put Arsenal into third place but they ended the day seventh in a cluster of clubs on eight points.

Arsenal manager Unai Emery said his side had struggled to cope with Watford`s physical style.

"They are more stronger than us so we want to break the lines from the goal kick and connect to Mesut Ozil, like we did with the first goal," he said.

"We have young players, we are working to improve and they will gain experience from matches like today. We can grow up and learn with these mistakes."

Watford are still seeking a first win of the season and remain bottom but they doubled their points tally to two.

Watford started with real purpose but were stunned when Aubameyang punished them twice in the space of 11 minutes.

In the 21st minute he collected Sead Kolasinac`s pass before turning sharply and firing beyond Ben Foster. He struck again after a flowing 20-pass move and the Gunners looked on course for three points.

They gifted Watford a lifeline after the break though when defender Sokratis Papastathopoulos gave away the ball to Gerard Deulofeu in his own area and he fed Cleverly to score.

"I was really happy with the performance of the players," Sanchez Flores said. "We have one point against a very tough team. It`s good for our confidence. We are positive."