Written off by many after an exasperating sequence of muscular injuries, the scorer of Germany`s World Cup-winning goal against Argentina in 2014 has bounced back in style this season. 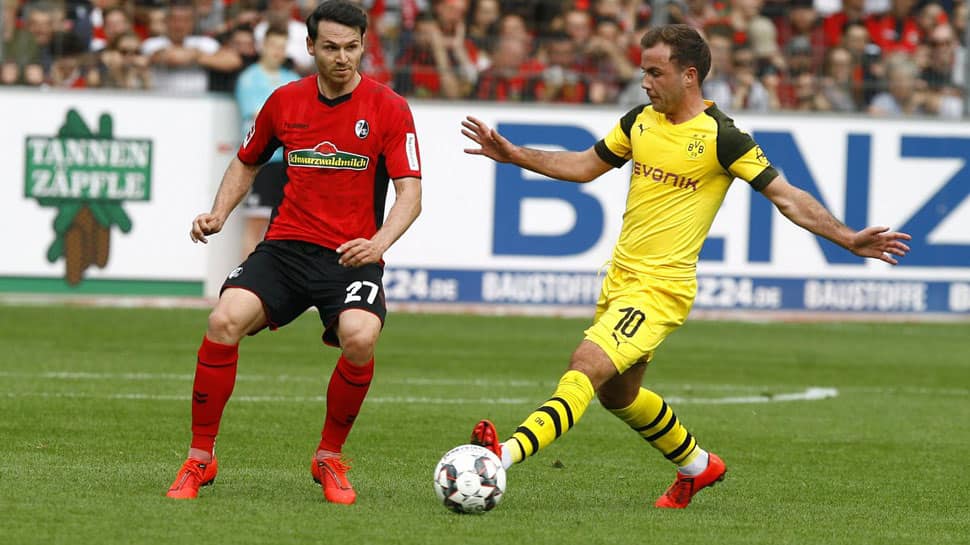 If Borussia Dortmund are to have any chance of overturning Bayern Munich`s two-point lead in their final three Bundesliga games, they are going to need Mario Goetze to be at his very best.

Written off by many after an exasperating sequence of muscular injuries, the scorer of Germany`s World Cup-winning goal against Argentina in 2014 has bounced back in style this season.

Goetze, still only 26, has provided six goals and seven assists after winning the confidence of coach Lucien Favre and is once again looking like his old self.

Dortmund will need him more than ever as captain Marco Reus will be suspended for two of their final three games following his sending-off in the 4-2 home defeat by Schalke 04 last Saturday.

To have any realistic chance of denying Bayern a seventh successive title, Dortmund will have to take maximum points from their remaining games, starting with their visit to ninth-placed Werder Bremen on Saturday.

They will also have to hope that Bayern lose at least one game -- not likely on Saturday when the Bavarians host bottom-of-the-table Hanover 96 but a possibility when they visit third-placed RB Leipzig in their penultimate game.

Goetze, raised at Dortmund and given his debut as a 17-year-old by Jurgen Klopp, was once regarded as one of the top young talents in Europe.

At 22, he scored the only goal in the 2014 World Cup final but by that time he was already at Bayern Munich where, although far from a flop, he failed to hit the expected heights.

He returned to Dortmund in 2016 but nine months later was sidelined for a metabolic disorder that was found to be causing muscle problems.

"I never gave up and kept working hard," he told Sport Bild in an interview last month.

"The coach has a very good feeling of how he can use the players` strengths in his game plan. I`m happy that I can contribute with my qualities and contribute to our success."

Goetze also shrugged off the suggestion that his three years at Bayern had been a failure and said he had learned from working with Pep Guardiola.

"I won three Bundesliga titles, two German Cup titles and became a world champion. So it wasn`t so bad. And I learned so much from Guardiola -- not only about football but also about myself, my personality and my development," he said.

Klopp, the current Liverpool manager, was also a huge influence, he added. “I often speak to Klopp. He brought me to the first team and made it all possible. We never stopped talking."

Even this season has been far from straightforward, with Goetze initially struggling to get into the team, but since the winter break, he finally appears to have turned the corner.

"He can decide the title and at the same time show two teams -- his former club and his current one -- that he`s the boss again," said former Germany midfielder Stefan Effenberg.

"After all the doubts that there have been over him in the last few years, it would be an incredible story."

Lionel Messi doubling down on Champions League pledge for Barcelona