The win, courtesy of goals from Miralem Pjanic and Emre Can, took Juve 16 points clear of Napoli. 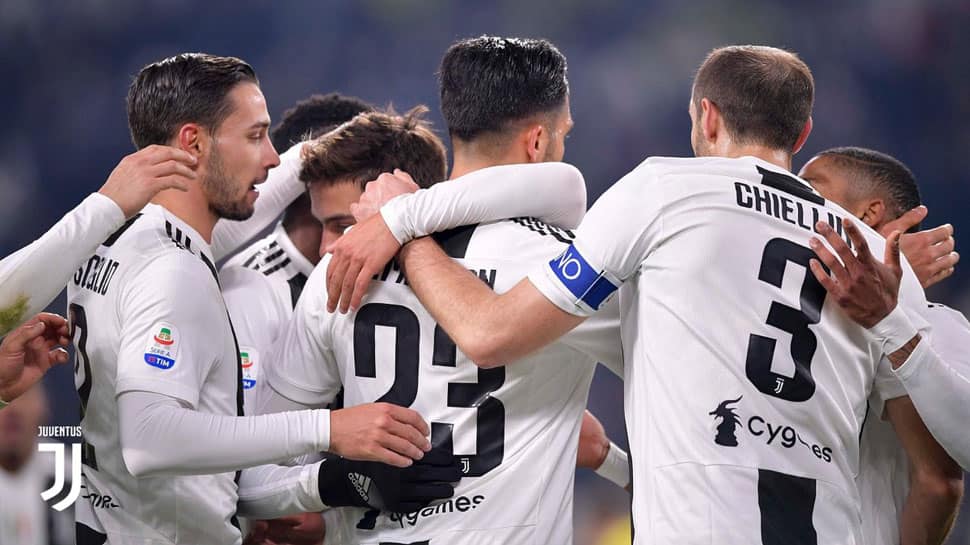 Serie A leaders Juventus held on to win 2-1 at Napoli in a stormy top-of-the-table clash on Sunday which saw both teams have a player sent off and Lorenzo Insigne miss a late penalty for the hosts.

The win, courtesy of goals from Miralem Pjanic and Emre Can, took Juve 16 points clear of Napoli and almost certainly wrapped up an eighth straight title for the unbeaten Turin giants who have 72 points out of a possible 78 with 12 games left.

Juventus raced into a 2-0 halftime lead after Napoli goalkeeper Alex Meret was sent off in the 25th minute. The visitors then had Pjanic dismissed and Napoli`s Jose Callejon pulled one back before Insigne let the Turin side off the hook.

The game hinged on an incident in the 25th minute when Napoli fullback Kevin Malcuit`s back pass was intercepted by Cristiano Ronaldo, forcing Meret to come out of his penalty area and lunge at the Portuguese forward who went to ground.

The referee awarded a straight red card without reviewing the incident on the pitchside monitor. Replays, though, suggested that, although Ronaldo had to jump over Meret`s outstretched leg, no contact was made.

"The rules, as I understand them, say that Meret should be sent off whether he makes contact or not," said Juve coach Massimiliano Allegri. "The referee decided, as did the video assistant."
However, Napoli coach Carlo Ancelotti said the referee should have seen the replay himself.

"The game was influenced by a controversial decision - did Meret touch him or not, which direction was the ball going? It would have been easier if the referee had looked on the monitor, given that it is there," he said.

Meret`s dismissal meant Napoli striker Arkadiusz Milik was sacrificed and replaced by substitute keeper David Ospina, whose first job was to pick the ball out of the net as Pjanic scored from the resulting free kick after 28 minutes.

Can added the second in the 39th when he was allowed a free header but the game took another twist with Pjanic`s dismissal for a second bookable offence -- a handball in midfield -- two minutes after halftime.

Callejon stole in behind Juve defender Giorgio Chiellini to turn in Insigne`s inswinging cross in the 61st minute to reduce the gap as Napoli turned the screw.

The hosts swarmed around the Juventus area and were awarded a penalty in the 82nd minute for handball against Alex Sandro, a decision awarded after a VAR review, but Insigne fired the spot kick against the inside of the post.

"I went to sleep because I should have taken Pjanic off after the first yellow card.Obviously, sixteen points is a significant advantage but the maths say that we haven`t won the championship yet," said Allegri.