Second-placed United had beaten Ipswich Town 2-0 on Saturday to move on to 88 points in the second-tier table. They are now five points ahead of third-placed Leeds with one more game to go. 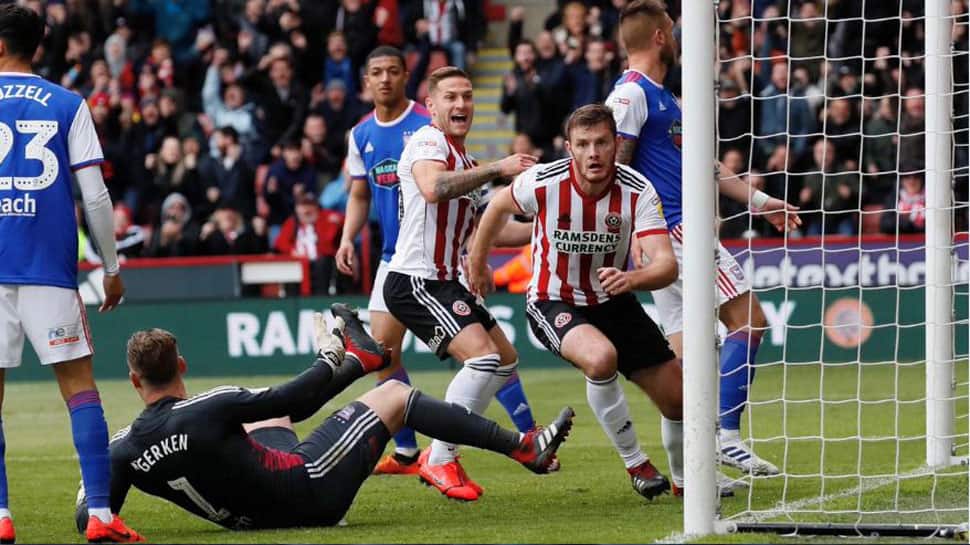 Sheffield United sealed promotion to the Premier League after Leeds United were held to a 1-1 draw by Aston Villa in a controversial Championship encounter at Elland Road in which tempers flared on Sunday.

Second-placed United had beaten Ipswich Town 2-0 on Saturday to move on to 88 points in the second-tier table. They are now five points ahead of third-placed Leeds with one more game to go.

Norwich City, with 91 points, were promoted on Saturday following a 2-1 win over Blackburn Rovers.

Leeds opened the scoring in controversial circumstances when Villa`s Jonathan Kodjia was down injured on the pitch. Leeds were about to put the ball out of play but Mateusz Klich picked it up and fired it into the bottom corner to spark a melee.

Villa`s Anwar Al Ghazi was sent off for his role in the protests after which Leeds boss Marcelo Bielsa, who was seen arguing with former England captain and assistant Villa coach John Terry on the touchline, asked his players to allow Villa to score unopposed when the game was restarted.

Albert Adomah was allowed to dribble past the Leeds team but even then Leeds defender Pontus Jansson attempted to stop him as he fired it past goalkeeper Kiko Casilla who stood at the edge of the box.

"Klich has apologised," Smith told Sky Sports. "Every credit to Leeds and Marcelo Bielsa for putting that right. I asked him and he agreed. He said `yes`. He apologised for what happened."

"Fair play to them. It was a good game of football until that moment."

Bielsa said he had allowed Villa to score in the spirit of sportsmanship.

"We gave the goal back," Bielsa said. "English football is known for its sportsmanship so I don`t need to comment on this kind of thing which is common in English football."

Villa defender Tyrone Mings also praised Leeds for allowing them to score the equaliser after failing to put the ball out of play so Kodjia could get treatment.

Leeds, who were league leaders until February, will now have to vie for promotion through the Championship playoffs with West Bromwich Albion and Villa also involved.

The fourth and final spot is yet to be decided with Derby County, Middlesbrough and Bristol City all in contention.

Curious case of no-confidence motion by BJP against Gehlot government