RB Leipzig`s Timo Werner scored a hat-trick as they demolished hosts Mainz 5-0 on Sunday to reclaim third place in the Bundesliga with an emphatic victory after three straight draws. 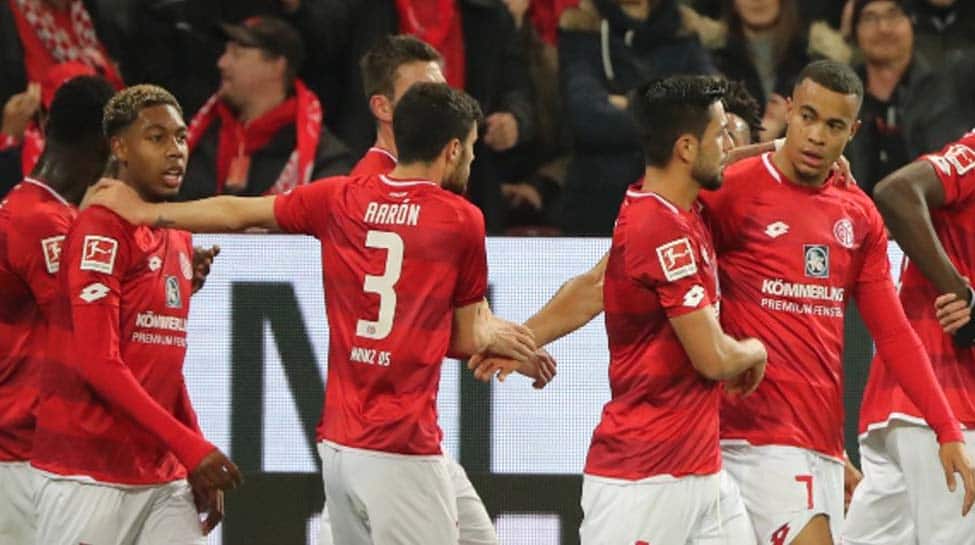 RB Leipzig`s Timo Werner scored a hat-trick as they demolished hosts Mainz 5-0 on Sunday to reclaim third place in the Bundesliga with an emphatic victory after three straight draws.

Germany international Werner, a target for several top European clubs this summer, opened his account in the 11th minute and Yussuf Poulsen nodded in the second goal in the 23rd.

Marcel Sabitzer killed off the game before the break, flicking in from close range as Mainz collapsed.

Werner scored again three minutes after the restart and the 24-year-old forward chipped the ball over keeper Florian Mueller in the 75th for his 24th goal of the season and 91st in all competitions for Leipzig to become their all-time top scorer.

"Timo Werner has developed a very good sense not to move only on the wings but to go over to the 10 position," said Leipzig coach Julian Nagelsmann of his striker`s work in a more central attacking role.

"Coupled with his speed, that makes him a more versatile player and makes it harder for his opponents to control him."

Leipzig, who crushed Mainz 8-0 earlier this season with Werner grabbing a hat-trick, moved back into third on 54 points, one point ahead of Bayer Leverkusen and two clear of Borussia Moenchengladbach in the battle for a Champions League spot.

Leipzig also set a club record with 68 goals scored this season, more than in any other entire campaign since their promotion to the Bundesliga in 2016.

Mainz put bodies in defence but were unable to match Leipzig`s speed down the wings and they failed to launch any sustained attacks of their own until late in the game.

Bayern Munich lead the standings with 61 points, four ahead of Borussia Dortmund who they face on Tuesday.

The Bundesliga became the first major sports league to resume last week, with no fans in attendance, after being suspended for more than two months due to the COVID-19 pandemic.