With Spurs talisman Kane having hobbled off injured and favourites City beginning to turn the screw, Son sent the home fans inside the London club`s majestic new stadium into delirium as he fired past Ederson in the 78th minute. 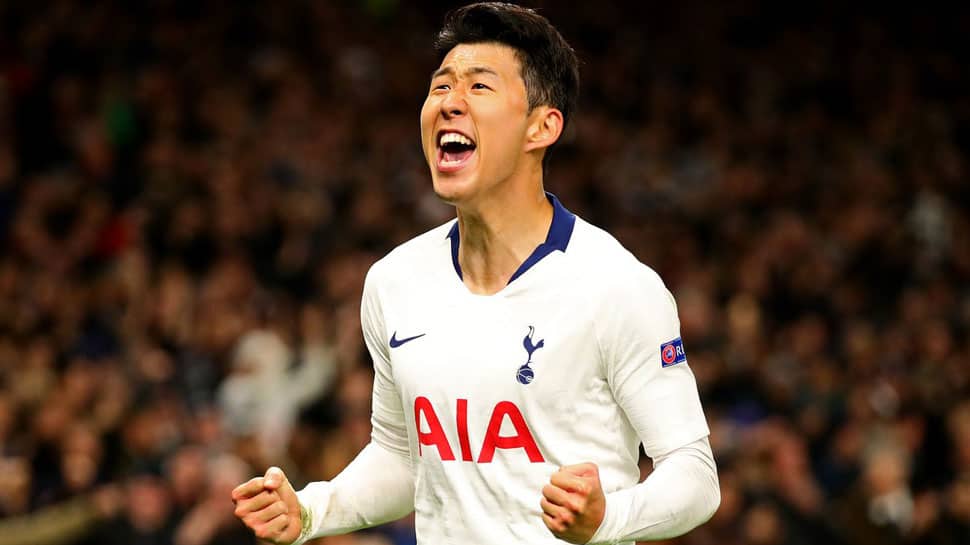 Son Heung-min once again proved there is more to Tottenham Hotspur than Harry Kane as the South Korean`s late goal secured a 1-0 home win over Manchester City in an absorbing Champions League quarter-final first leg on Tuesday.

With Spurs talisman Kane having hobbled off injured and favourites City beginning to turn the screw, Son sent the home fans inside the London club`s majestic new stadium into delirium as he fired past Ederson in the 78th minute.

It gave Tottenham a slender but precious advantage to take to City`s Etihad Stadium next week when they will attempt to reach the Champions League semi-finals for the first time.

Quadruple-chasing City were not at their best as Spurs chased and harried Pep Guardiola`s side for 90 minutes and they will rue Sergio Aguero`s first-half penalty miss.

The Argentine was handed the chance to put City ahead when full-back Danny Rose was controversially adjudged by VAR to have used his arm to block a shot, but his 13th-minute spot kick was brilliantly saved by Hugo Lloris.

The French keeper`s heroics produced a deafening roar not heard along the Tottenham High Road since Spurs moved out of their old stadium two years ago, but it was nothing compared to the sound that greeted Son`s 78th-minute winner.

"As a team, we never give up, we fight until 90 minutes. I think we deserved to win, we were more clinical than them," said Son, who last week scored the first Premier League goal in the 62,000-seat arena, and now owns the first European strike there.

"I like this stadium, it is amazing to play here, I am grateful for the opportunity to play at this stadium," he added.

Tottenham fans in the 17,500 capacity South Stand displayed placards before kickoff spelling out the club`s motto `To Dare is To Do` -- and their team obliged, going toe-to-toe with a side who had won 21 of their last 23 games in all competitions.

Dele Alli volleyed Moussa Sissoko`s cross over early on but Tottenham were then stopped in their tracks.

Raheem Sterling cut in and fired goalwards and Rose, diving to block, was harshly penalised for handball, courtesy of VAR, despite no City players even appealing for a penalty.

France international Lloris, who has come in for criticism this season, guessed right and made a superb stop.

Spurs manager Mauricio Pochettino said on the eve of the game that his side would need to match the intensity of a City outfit oozing quality, both on the pitch and on a bench containing Kevin de Bruyne, Gabriel Jesus and Leroy Sane.

Tottenham worked hard to deny City time, with the once-maligned Sissoko immense, but after England forward Kane hobbled off just before the hour mark with a worrying-looking ankle injury after a clash with City`s surprise inclusion at left back Fabian Delph, the hosts appeared to be flagging.

City, for whom Sterling was a constant menace, were hunting an away goal but then Son, who has a knack of scoring for the side Guardiola once described as the "Harry Kane team" when their talisman had been sidelined, struck the decisive blow.

At first, the Korean`s control from Christian Eriksen`s measured pass was sloppy, but Son retrieved the ball, then cut in from the byline and lashed a shot past Ederson.

Guardiola sent on De Bruyne and Sane in the 89th minute, but Tottenham survived six minutes of stoppage time to leave City with a stiff task next week.

"Sometimes 1-0 is better than 0-0, as you know exactly what you have to do," Guardiola, whose side lost to Liverpool in last season`s quarter-finals after a 3-0 first-leg defeat, said.

"We have to go out to score goals."