'What is the point of VAR?' fumes Santiago Solari after Real Madrid loss

With Real Madrid trailing 1-0 in the second half, teenage Brazilian Vinicius Jr. fell over the arm of outstretched goalkeeper Geronimo Rulli in the area, but referee Jose Luis Munuera Montero neither awarded a penalty nor consulted the technology. 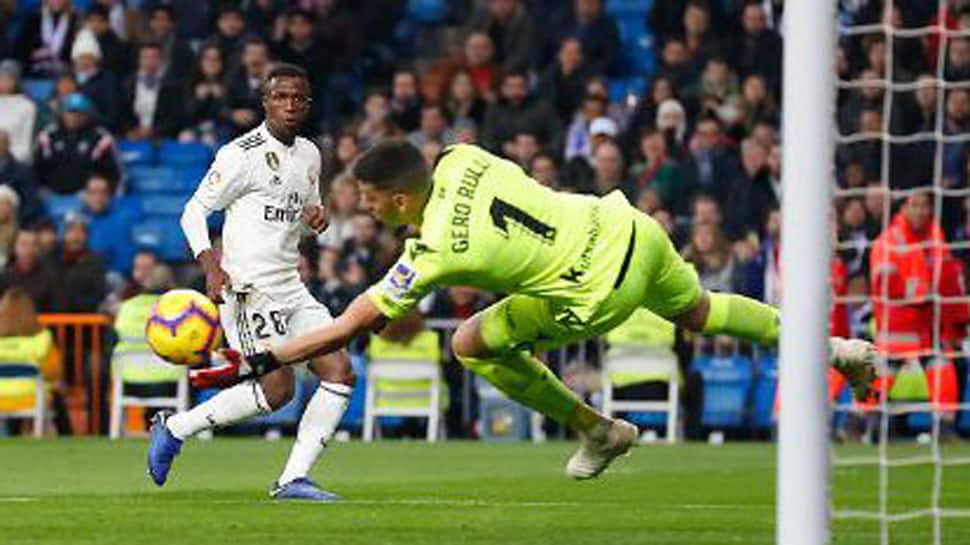 Real Madrid coach Santiago Solari was left fuming and questioning the point of video technology (VAR) in La Liga after his side were not awarded what looked a clear penalty during their shock 2-0 loss at home to Real Sociedad on Sunday.

With Real trailing 1-0 in the second half, teenage Brazilian Vinicius Jr. fell over the arm of outstretched goalkeeper Geronimo Rulli in the area, but referee Jose Luis Munuera Montero neither awarded a penalty nor consulted the technology.

"If VAR is not used in a play like that, then it loses the whole point of its existence," a furious Solari told a news conference.

"We are all human and we all make mistakes but when you have the chance to look over the evidence again and you do not, it`s difficult to understand."

The technology, which was hailed as a success at the 2018 World Cup, has been in use in Spain`s top flight since the start of this season.

According to protocol, the VAR operators are only supposed to inform the referee and ask for a play to be reviewed if the official has made an "obvious mistake."

Real were also denied a penalty in the first half when captain Sergio Ramos collided with Sociedad midfielder Asier Illarramendi.

"I thought the first incident was a possible penalty but I give the benefit of the doubt to the referee and to VAR, but the second one is a penalty every day of the week," added Solari.

Real went on to suffer a sixth league defeat of the season which left them fifth in the standings after 18 games and almost certainly ended their hopes of catching La Liga leaders Barcelona.

Sociedad took the lead in the third minute with a penalty from Willian Jose and midfielder Ruben Pardo sealing the points with a late header after Madrid winger Lucas Vazquez was sent off for a second yellow card.

Real Madrid director Emilio Butragueno also said he struggled to comprehend how the penalty was not given.

"We are always very respectful towards referees and we are in favour of VAR, but we do not understand this incident," he added.

"It looks like the VAR was not consulted in this play, the referee did not give the penalty and then the play continued. We sincerely cannot understand it. It was a critical moment in the game. The referee doesn`t have to be perfect, VAR was introduced for moments like this and it wasn`t consulted, so why do we have it?"