Portuguese Ivan Cavaleiro slotted home clinically in the 28th minute after great work by Matt Doherty and it was enough for Wolves to reach the last eight for the first time since 2003. 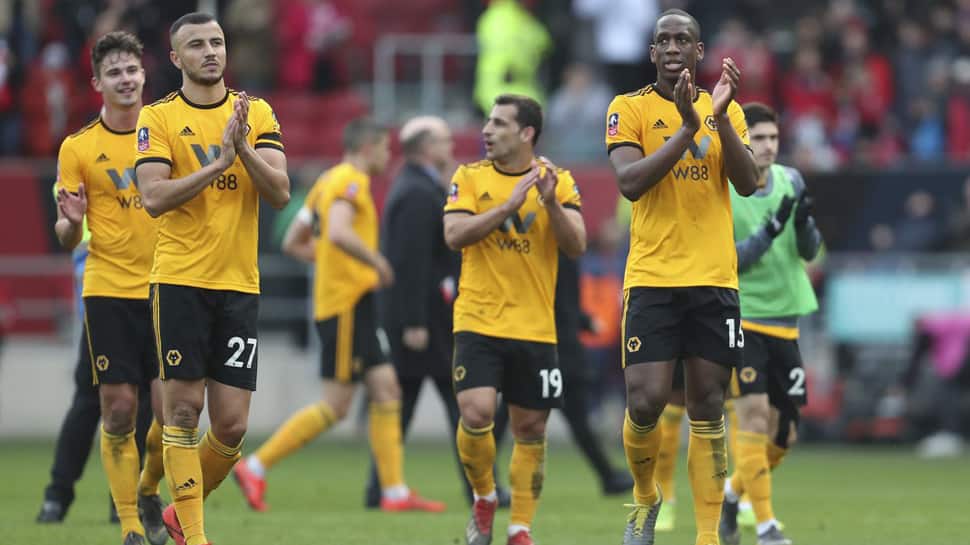 Wolverhampton Wanderers` impressive season continued as they moved into the quarter-finals of the FA Cup with Ivan Cavaleiro`s first-half goal sealing a 1-0 victory at Championship (second-tier) club Bristol City on Sunday.

Portuguese Cavaleiro slotted home clinically in the 28th minute after great work by Matt Doherty and it was enough for Wolves to reach the last eight for the first time since 2003.

Palace were far too good on Sunday for third-tier Doncaster Rovers, with first-half goals by Jeffrey Schlupp and Max Meyer securing a 2-0 win to send Roy Hodgson`s side into the last eight for only the second time in 24 years.

Schlupp ran through to fire home in the eighth minute and Meyer`s effort on the stroke of halftime deflated the hosts who had hoped for a first-ever run to the last eight.

In the day`s other fifth-round tie, Swansea City recovered from a halftime deficit at home to fellow Championship outfit Brentford to win 4-1 at the Liberty Stadium.

Bersant Celina`s free-kick rebounded off the post and in off keeper Luke Daniel to level it up before a wonderful solo goal by Daniel James put the Welsh club ahead.

With Brentford down to 10 men after a red card for Ezri Konsa, Celina made it 3-1 and George Byers added a late fourth goal to seal a second successive quarter-final appearance for the Swans.

Comfortably placed in the Premier League and with Liverpool`s scalp in the FA Cup already, Wolves have emerged as dark horses to go all the way this season.

In the first half at Bristol City, they certainly had the look of a side who fancy their chances.

Doherty was a constant menace for the Bristol defence and he was unlucky not to score when his shot hit the woodwork after a flowing move down the right.

It was his trickery that opened up the home defence again before his cut-back picked out Cavaleiro to fire home.

The second-half was a different story as City, sixth in the second tier, improved dramatically and forced Wolves keeper John Ruddy into several sharp saves.

Substitute Matty Taylor was twice denied and in stoppage time, with City throwing the kitchen sink at Wolves, Ruddy reacted well to stop opposite number Frank Fielding equalizing after he had gone up for a corner.

"I`m very happy, it was very tough, but I`m happy for fans and it was a moment of joy," said Wolves boss Nuno Espirito Santo, who has guided his team to seventh on their top-flight return. "In the first half they gave us space but then they changed it and they are a tough team."

Only seven of the 16 teams to reach the fifth round were from the Premier League but with Chelsea hosting Manchester United on Monday in a repeat of last season`s final, six of the teams in the last eight will be from the top flight.