World Cup hosts Russia turned in another unconvincing display as Austria extended their winless run stretching back to October with a 1-0 victory in a friendly on Wednesday. 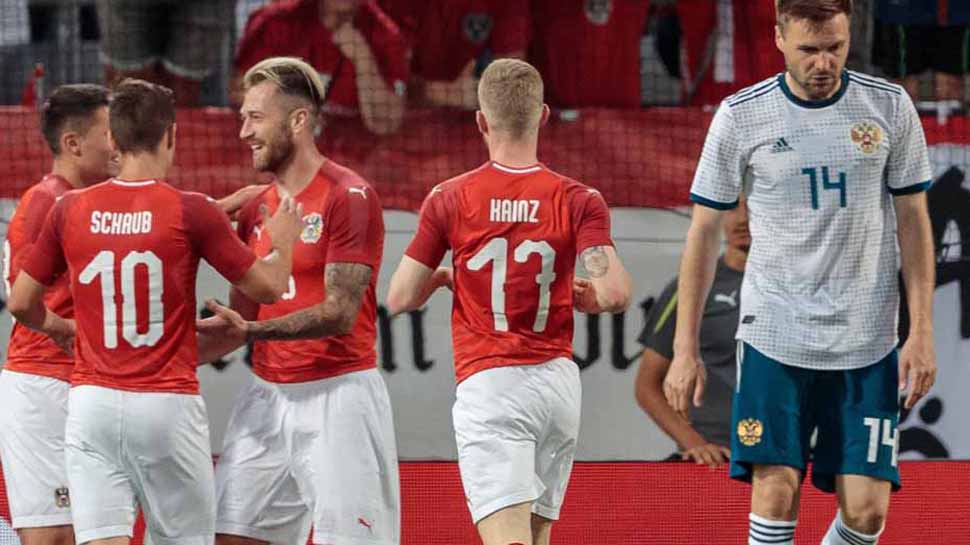 World Cup hosts Russia turned in another unconvincing display as Austria extended their winless run stretching back to October with a 1-0 victory in a friendly on Wednesday.

The home side, who have not qualified for the finals, exposed defensive frailties in Stanislav Cherchesov`s team with Alessandro Schopf sending a neat finish past Igor Akinfeev following a fine run from Marko Arnautovic after 28 minutes.

Shorn of competitive football due to qualifying as hosts, Russia have spent the last two years playing friendlies against some of the world`s leading sides, but their preparations have been far from ideal.

Cherchesov’s spluttering team faced a barrage of criticism in the Russian media after suffering heavy home defeats by Brazil and France in March and the coach’s negative tactics were also questioned.

Russia have conceded 10 goals in their last four games and failed to win in six matches.

Sergei Ignashevich, who will turn 39 in July, came out of retirement to join the Russia squad ahead of the major global sporting showpiece, replacing the injured Ruslan Kambolov.

But the return of the veteran, who earned his 121st cap against Austria, did little to reduce Russia`s defensive woes and the defeat represented another big blow for Cherchesov`s team who clearly lack quality in every department.

On paper, however, Russia are still favourites to reach the World Cup knockout stages from a group including Uruguay, Saudi Arabia and Egypt.

Russia host Turkey in their last warm-up in Moscow on June 5.