BJP MLA calls NCP leader his sister after thrashing her, gets her to tie rakhi

The BJP MLA apologised to her in a press conference and said that all misunderstandings have been cleared between the two. 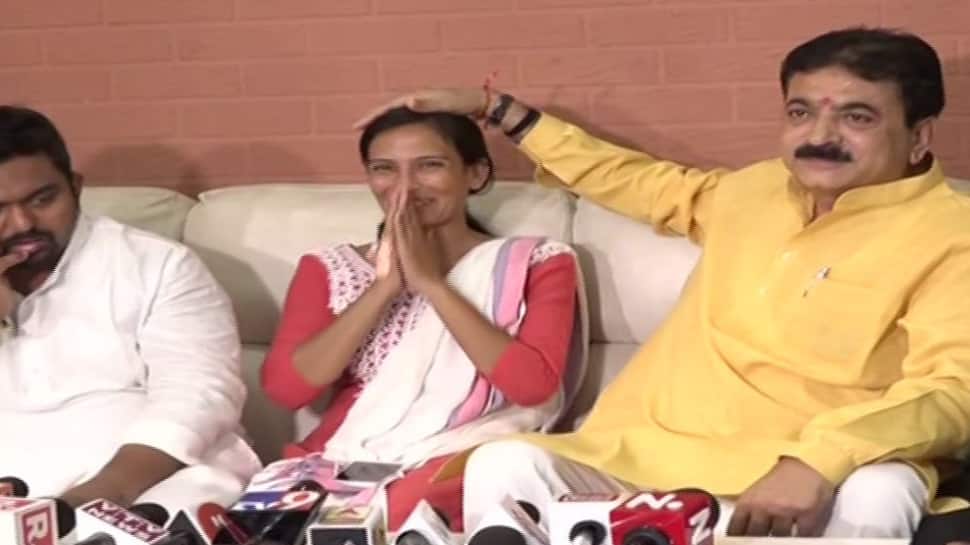 Hours after lashing out at Bharatiya Janata Party's (BJP) Naroda MLA Balram Thawani for kicking her, NCP leader Nitu Tejwani tied him a rakhi. The MLA was facing ire after Thawani was caught on camera misbehaving with Nitu in Gujarat's Naroda when she had come to meet him over a local issue.

The BJP MLA apologised to her in a press conference and said that all misunderstandings have been cleared between the two. "She's like my sister, I have apologized to her for what happened yesterday. We have cleared out the misunderstandings between us. I have promised to help her if she ever needs any help," Thawani said.

Balram Thawani, BJP MLA who was caught on camera kicking a woman NCP leader in Naroda: She's like my sister, I have apologized to her for what happened yesterday. We have cleared out the misunderstandings between us. I have promised to help her if she ever needs any help #Gujarat pic.twitter.com/sAF9Jm6ZXB

Bharatiya Janata Party's (BJP) Naroda MLA Balram Thawani is facing trouble after he was caught on camera kicking NCP leader Nitu Tejwani when she went to his office to meet him over a local issue. The incident took place in Gujarat's Naroda on Sunday. Nitu has registered a complaint against the MLA.

The NCP leader had trained guns at the BJP government and even posed questions regarding women safety to Prime Minister Narendra Modi. "I had gone to meet BJP MLA Balram Thawani over a local issue but even before hearing me he slapped me, when I fell down he started to kick me. His people also beat up my husband. I ask Modi ji, how are women safe under the BJP rule?," she had told news agency ANI.

Thawani meanwhile had said that he was ready to apologise to her and defended himself saying it happened in self-defence. "I got swayed by emotions, I accept the mistake, it was not intentional. I have been in politics for last 22 years, such thing has never happened before. I will say sorry to her," he said.

He had also said that 40-50 women and 20-25 men gathered at his place on Sunday. He added that he offered them tea and snacks and discussed the problems that they raised over water issue. "I told them to come to my office on Monday and assured them of help as my office is closed on Sunday. The conversation went on for about 20-25 minutes. When the two men standing next to me were trying to show muscle power, I told them that we should not be fighting and should instead look to find a solution," he had added.

However, he claimed that the men punched him and pushed him out of the office after which he fell to the ground. "I was trying to push people in self-defence. I agree that I mistakenly kicked the woman which has been caught on camera and is being shown on TV," he had said.

He alleged that the same people tried to get into a scuffle with his brother a few days back. "The woman is in NCP and her husband is also associated with Sindhu Sena and NCP. Four days ago, they had fought with my brother. They had illegal water connections which were discontinued so to take revenge, they had planned the entire incident," he had claimed.

Women safe under BJP rule? NCP leader asks PM Modi after she was kicked by BJP MLA in Gujarat