At least seven people died in various rain-related incidents and more than 1,000 people were rescued from Vadodara and nearby areas.

Vadodara continued to reel under flood-like situation on Friday following incessant rains for over 24 hours. Adding to the woes, Vishwamitri river has been overflowing, leading to more water enter the city. The National Disaster Response Force (NDRF) along with Indian Air Force and local authorities are trying to rescue people from low lying and flooded areas.

At least seven people died in various rain-related incidents and more than 1,000 people were rescued in Vadodara and nearby cities after a record rainfall which continued since Wednesday. NDRF squads, inducted by IAF C130 jet, airlifted 138 persons on Thursday night.

Floods led to the suspension of rail and road transport with several trains being cancelled or short terminated. This led to an increase in the prices of essential items and food. Half litre milk was being sold at Rs 40. Long queues were observed outside dairy distribution booths. Prices of vegetables also shot up with vendors reportedly charging twice the regular amount. 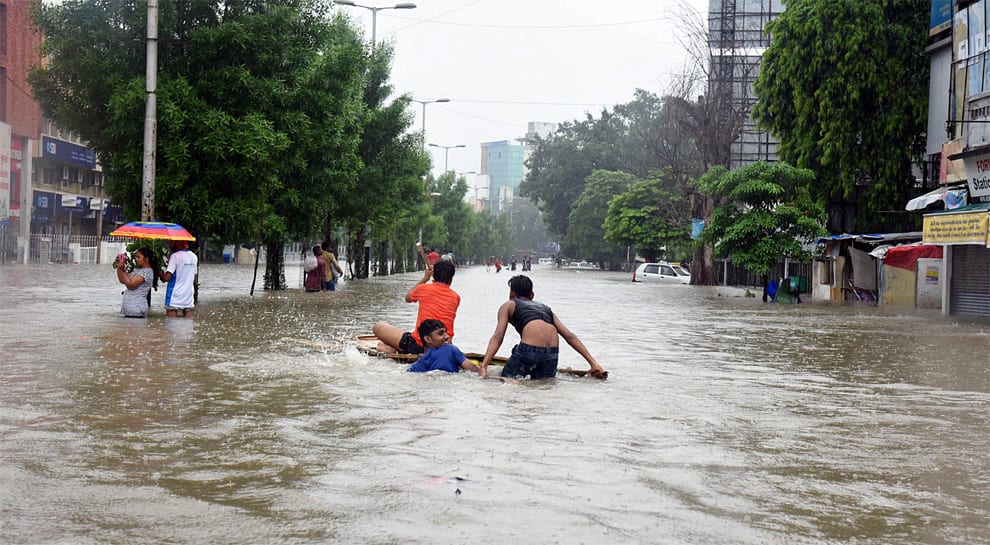 A general view of the flooded street after heavy rain in Vadodara on Thursday. (ANI Photo)

As many as 106 roads were closed in Vadodara due to waterlogging situations. The Forest Department caught three crocodiles which entered urban areas due to flooding.

Chief Minister Vijay Rupani held a high-level meeting on Thursday in Gandhinagar to review the situation. Vadodara Collector Shalini Agarwal on Thursday said rescue and evacuation operations are underway on war footing in the city after incessant rains

Gujarat CM Shri @vijayrupanibjp briefs media on the latest post-rain situation and the ongoing relief and rescue measures to restore normalcy in Vadodara city as soon as possible pic.twitter.com/zg5qcok13U

Dozens of trains and buses to and from Vadodara in Gujarat have been cancelled following heavy rain over the past 24 hours. Authorities also diverting or short terminating trains on the Mumbai-Delhi route covering Gujarat from Wednesday evening.

Indian Meteorological Department has predicted heavy to very heavy rainfall at isolated places over Gujarat. "Strong winds, speed reaching 40-50 km, are likely to prevail over along and off Gujarat-Maharashtra-Goa coasts. Fishermen are advised not to venture into these areas," it said.