The clarification from Khattar came amid intense speculations that Dushyant’s mother Naina Chautala may be given the deputy CM's post. 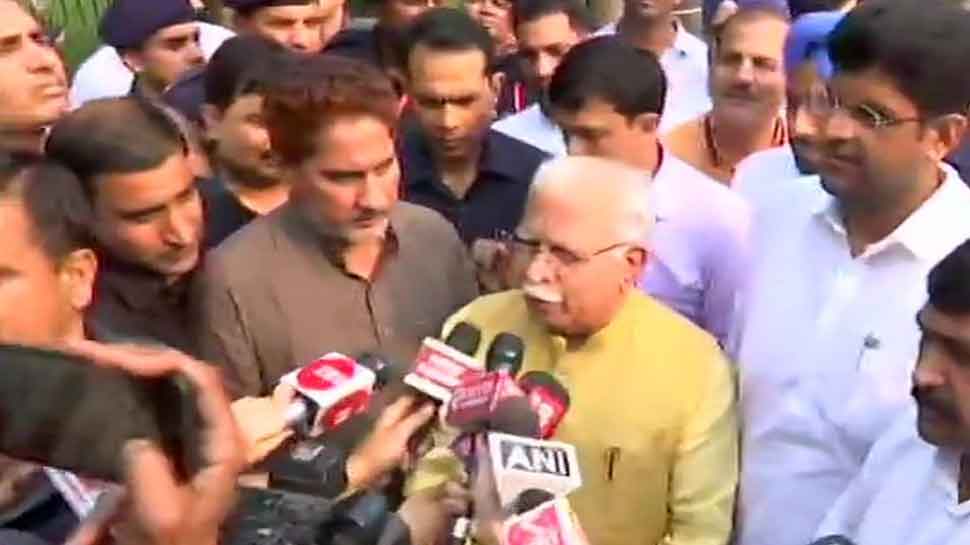 NEW DELHI: Jannayak Janata Party (JJP) chief Dushyant Chautala will take oath as the Deputy Chief Minister of Haryana on Sunday, CM-elect Manohar Lal Khattar said on Saturday who will also take oath along with the former at the Raj Bhawan.

Talking to reporters, Khattar said that Haryana Governor Satyadeo Narain Arya has accepted the BJP and JJP's joint claim to form the government in the state.

''We have staked claim to form government in Haryana. Governor has accepted our proposal and invited us. I have also tendered my resignation which has been accepted. Dushyant Chautala has been named deputy chief minister,'' Khattar said adding, ''The CM and deputy will take oath on Sunday at 2:15 pm at the Raj Bhawan. Name of other ministers will be announced tomorrow.''

The clarification from Khattar came amid intense speculations that Dushyant’s mother Naina Chautala may be given the deputy CM's post.

Khattar was speaking to reporters after meeting the Governor with senior BJP leader Ravi Shankar Prasad and Dushyant Chautala.

Earlier, Prasad confirmed that the BJP will not accept any support from controversial HLP leader Gopal Kanda.

Kanda’s offer of support and claim of being the kingmaker had led to massive outrage as the Sirsa MLA is undergoing trial for allegedly abetting the suicides of a former employee in his aviation company and her mother.

The Bharatiya Janata Party (BJP) had earlier sealed a deal with Dushyant Chautala's JJP to form government in Haryana. The decision on the alliance was taken by BJP chief and Union Home Minister Amit Shah late on Friday after a joint meeting of BJP and JJP leaders.

Dushyant emerged as the 'kingmaker' in Haryana after his party won 10 seats in the assembly election in the state.

"Accepting the mandate by the people of Haryana, leaders of both parties (BJP-JJP) have decided that BJP-JJP will form the government together in Haryana. CM will be from BJP & Deputy CM will be from JJP," Amit Shah said after the meeting.

The Chautala family will be making a comeback to power after 15 years. Dushyant's grandfather and former INLD leader Om Prakash Chautala was defeated by the Congress in the 2004 elections. Om Prakash Chautala and his son Ajay Chautala are currently serving a 10-year prison term in a recruitment scam.