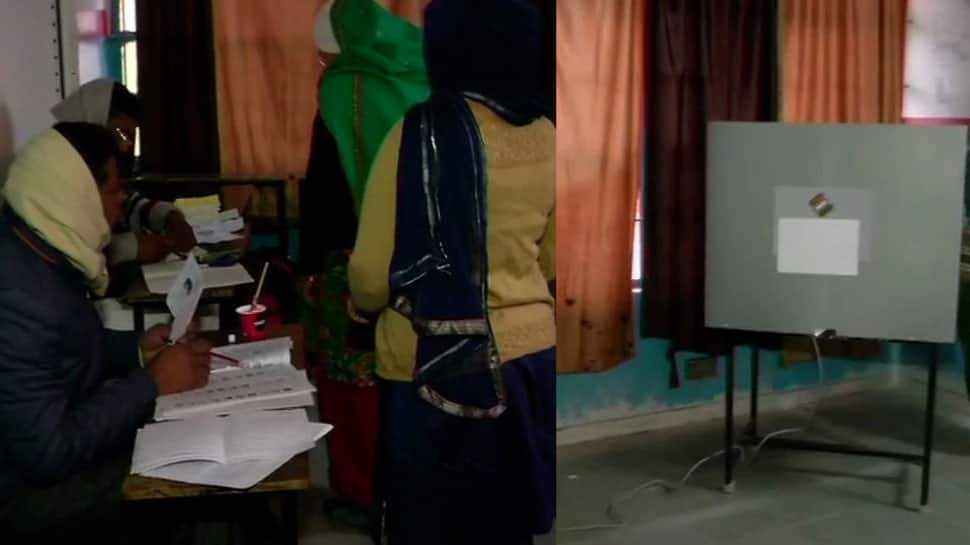 JIND: Polling for the Jind and Ramgarh assembly constituencies is currently underway amid unprecedented security arrangements put in place by the state election commission on Monday.

Voting began at 7 AM and will conclude at  5 PM, according to the Election Commission officials. At least 21 candidates, including two women, are in the fray for the Jind bypoll.

Here are the latest updates:-

-A 101-year-old woman cast her vote at polling station number 114 during Jind bypoll in Haryana.

A 101 year-old woman cast her vote at polling station number 114 during Jind bypoll in Haryana. pic.twitter.com/XLl4EDEQQB

-Here are some visuals of polling in Rajasthan;s Ramgarh.

Rajasthan: Voting is underway for the by-poll to Ramgarh assembly constituency. pic.twitter.com/OpNX3I4TyI

Jind, Haryana: Randeep Surjewala offers prayers at Somnath temple. He is the Congress candidate for the by-election to the legislative assembly constituency of Jind. Voting is underway for the by-election. #JindByelection pic.twitter.com/r1MeAPaBpt

The constituency is witnessing a multi-cornered contest with prestige at stake for key political outfits, including the ruling BJP and the opposition INLD, Congress and the fledgling JJP, formed by Lok Sabha MP Dushyant Chautala after a split in INLD.

He said the Jind assembly segment has been divided into 24 sectors, with six deputy superintendents of police being made in-charge to oversee security arrangements.

Counting of votes will take place on January 31.

Earlier, the high-decibel canvassing exercise, which came to an end on Saturday evening, was dominated by barbs, charges and counter-charges as arch-rivals BJP, Congress, INLD and JJP are eyeing the results as a self-assessment exercise ahead of Lok Sabha polls this year.

The high-stakes election is considered a referendum on the Manohar Lal Khattar government and also a semi-final ahead of Lok Sabha elections. Notably, Surjewala, Redhu and Digvijay are all Jats while Middha belongs to the Punjabi community.

As many as 48,000 voters - out of the total 1,71,113 eligible to vote - belong to the Jat community while the remaining belong to Brahmin, Punjabi and other communities.

Arshi, a Brahmin leader from Jind, could also play spoilsport in the multi-cornered contest.

Meanwhile, the bypoll for Ramgarh seat in Rajasthan will also take place on Monday.

The election in this constituency was not held along with other 199 constituencies on December 7 due to the demise of BSP candidate Laxman Singh.

As many as 20 candidates including two women are in the fray for the assembly polls which will be held on 278 booths in the constituency, according to returning officer Pankaj Sharma.

Around 278 polling stations have been set up for the election.

The result will be announced on January 31.

In the December 7 assembly elections, Congress finished as the single largest party winning 99 out of 200 seats.