The oath-taking ceremony will be held around 2.15 pm at the Raj Bhavan. 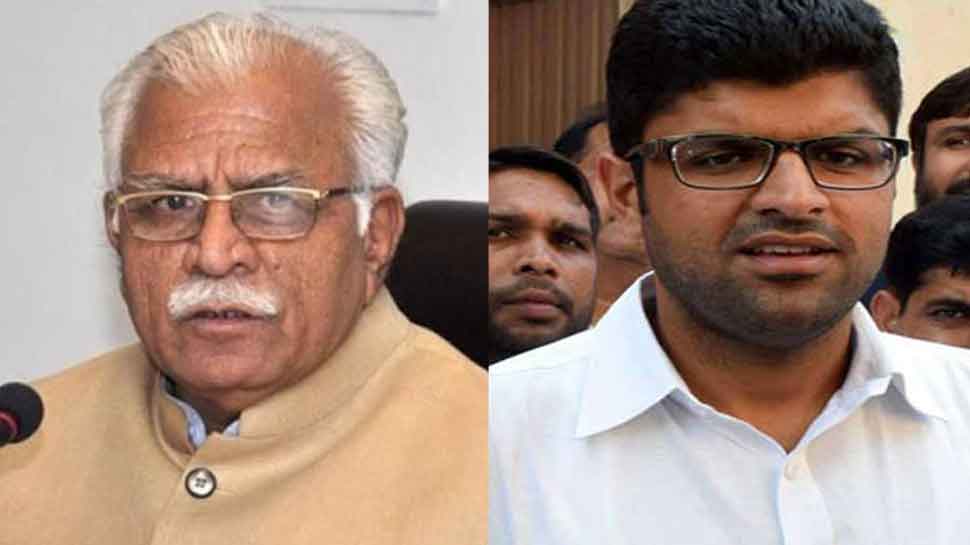 Chandigarh: BJP leader Manohar Lal Khattar and Jannayak Janta Party (JJP) leader Dushyant Chautala will take oath as the Chief Minister and the Deputy Chief Minister, respectively, of Haryana on Sunday. The swearing-in ceremony will be held at Raj Bhavan at 2.15 pm.

"We have staked claim to form government in Haryana. The Governor has accepted our proposal and invited us (to form the government)," Chief Minister-designate Khattar told reporters. Khattar further said that he has tendered his resignation, which has been accepted by the Governor.

ML Khattar: We have stake claim to form govt in Haryana. Governor has accepted our proposal & invited us. I have tendered my resignation which has been accepted. Tomorrow at 2:15 PM oath taking ceremony will be held at Raj Bhavan. Dushyant Chautala will take oath as Deputy CM. pic.twitter.com/gukF9WWFbk

"Tomorrow (Sunday) at 2.15 pm, oath-taking ceremony will be held at Raj Bhavan. Dushyant Chautala will take oath as Deputy CM," he added.

JJP chief Dushyant was present along with Khattar when he met Governor Satyadeo Narain Arya to stake the claim for the government formation. Seven independent legislators were also present there.

His father Ajay Chautala, who is lodged in Tihar Jail for conviction in a teacher recruitment scam, was granted furlough of two weeks on Saturday. He will also attend the oath-taking ceremony.

At his furlough, Dushyant said, "Can't my father celebrate Diwali with his family."

BJP, which won 40 seats and was six short of a majority in the 90-member Assembly, announced an alliance with the JJP led by Dushyant Chautala, the great grandson of former Deputy Prime Minister Devi Lal, on Friday evening.

Earlier, Khattar was unanimously elected as leader of the BJP Legislature Party at a meeting here. His name was proposed by legislator Anil Vij and seconded by the rest of the 38 legislators.

Prasad told the media that since the BJP is the single largest party, it would meet the Governor and stake claim to form the government.

On the post of Deputy Chief Minister, Prasad clarified that there would be only one."It will be the prerogative of the Chief Minister to take a decision on the formation of the Cabinet and its composition," he replied to another media query.

The Union Minister, who was here as a party observer, also clarified the party would not be taking any support from Haryana Lokhit Party MLA Goyal Kanda.

"All are united," he said, adding the BJP would give the clean and stable government and this is "our assurance to the people of Haryana".

Khattar said all 40 MLAs of the BJP have unanimously elected him as their leader.

"I thank all of them and the people of Haryana. I would like to assure them as well as all those friends who are supporting us that I shall take all of them along for the next five years and all of us shall work together for the betterment and upliftment of our state of Haryana," Khattar said.

On Thursday, after the announcement of the results of Haryana Assembly elections, in which the BJP fell short by six seats from the magical figure of 46 needed for a majority, the businessman-turned-politician extended unconditional support to the BJP for forming the state government.

There were also reports of the BJP`s top leaders meeting Kanda. However, the party had to backtrack in the face of massive criticism as Kanda is accused of abetting to suicide Geetika Sharma, an air hostess with his now-defunct MDLR airlines.

Geetika, 23, committed suicide in 2012 alleging harassment by Kanda and one of his aides, and her mother, Anuradha, also killed herself a few months later apparently unable to bear the loss of her daughter.

Kanda was then a minister in the Congress-led Haryana government. He remained in jail for a year and a half and was granted bail in March 2014, and the charge of rape was dropped by the Delhi High Court.

He later formed the Haryana Lokhit Party, on a ticket of which he has won the Assembly election from Sirsa constituency.

The criminal case against him is still pending in New Delhi`s Rouse Avenue court.