The scientists created reversed 3D-printed replicas of the children’s normal ears and used the replicas to make biodegradable moulds full of tiny holes. 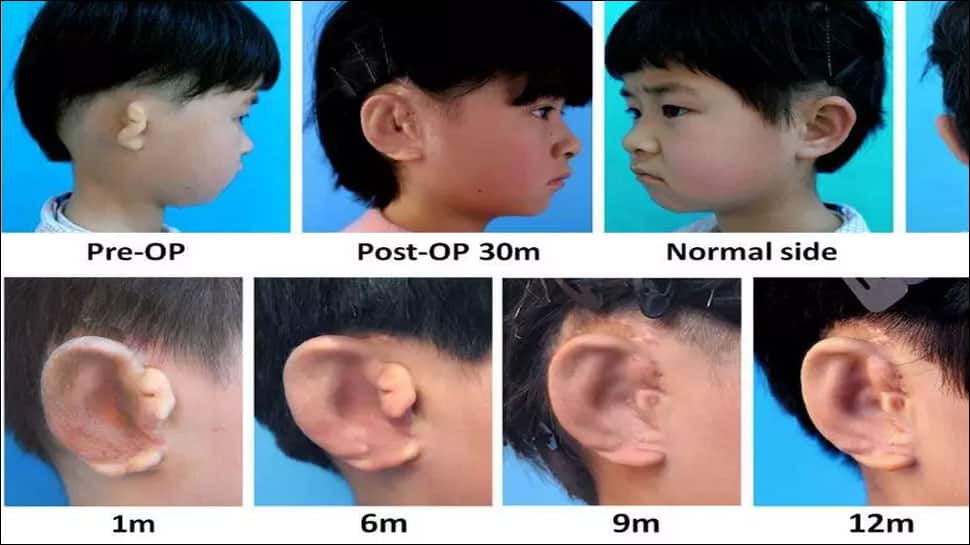 Images of the lab-grown ear grafted on one of the children. (Image courtesy: EbioMedicine)
Share:
Written By:

New Delhi: Scientists have made a breakthrough in regenerative medicine after they successfully grew a perfectly compatible ear in a lab and grafted it onto a patient.

Five children have received new ears through the process – a world's first – which uses their own cells combined with a 3D-printed biodegradable mould.

The children, aged between six and nine years, who underwent the experimental surgery were all born with a defect in one ear known as microtia, a condition in which the external ear is small and underdeveloped.

Two-and-a-half years ago, the first child to undergo the procedure showed no signs. The body had rejected or accidentally absorbed the new cells, the Chinese team who developed the procedure wrote when they published their findings in the journal EbioMedicine.

The scientists created reversed 3D-printed replicas of the children’s normal ears and used the replicas to make biodegradable moulds full of tiny holes.

The next step involved the collection of the cartilage cells called chondrocytes from the children’s deformed ears which were used to grow ear-shaped cartilage with the moulds in a lab.

After three months, the ears grown in the lab were grafted on the children as the cartilage cells begin to grow in the shape of the mould, and the mould itself begins to break down.

“It’s a very exciting approach,” Tessa Hadlock, a reconstructive plastic surgeon at the Massachusetts Eye and Ear Infirmary in Boston, told New Scientist, which first reported on the research.

“They’ve shown that it is possible to get close to restoring the ear structure.”

The recipients of the new ears will now be monitored by the scientists for the next five years to evaluate the success of the procedure – whether the ears remain intact after the moulded scaffold has completely broken down – and working to refine the procedure in the hope of producing increasingly natural-looking ears.

The surgery was reportedly inspired by the so-called 'earmouse', a lab mouse which appeared to have a human ear growing on its back.