"Avengers" director duo Anthony and Joe Russo, who co-produce this film with Hemsworth and action choreographer-turned-filmmaker Sam Hargrave, have gone for more than just locations while delivering an Indian whiff. If "Extraction" is billed as a high-octane actioner, a lot of the stunts would remind you of old-school Bollywood. 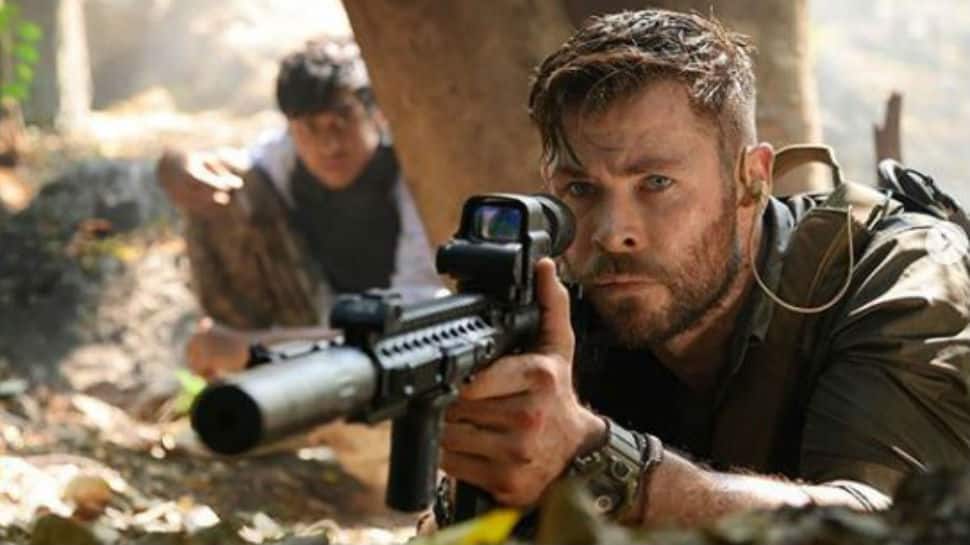 Thor of all things Hollywood comes to India -- to Bangladesh strictly, going by the script. But because it`s Ahmedabad being passed off as Dhaka, we`ll gleefully go with the idea of "Extraction" being Chris Hemsworth`s `India film`.

"Avengers" director duo Anthony and Joe Russo, who co-produce this film with Hemsworth and action choreographer-turned-filmmaker Sam Hargrave, have gone for more than just locations while delivering an Indian whiff. If "Extraction" is billed as a high-octane actioner, a lot of the stunts would remind you of old-school Bollywood. For a change, this is not so much about contemporary Hollywood CGI razzle as it is about vintage Mumbai action masala, you realise as Hemsworth bashes up packs of armed goons or engages apna Randeep Hooda in some good old knife-and-bare hands sparring.

Perhaps Hemsworth, Russo and Hargrave visualised it that way. An action film that will primarily play out on mobile phones cannot hope to impress with intricate SFX wizardry. Rather loud-impact stunts, kept flowing non-stop, are good enough for what actually is -- an OTT film.

"Extraction" won`t disappoint action buffs, in that sense. The film is unabashedly uni-dimensional in situations, plot and characters despite a backdrop that could have been tapped to create a smart socio-political thriller. Instead, the effort never deviates from its intention of being a loud stunt fest and little else.

Joe Russo`s screenplay draws from a graphic novel that he once co-authored, titled "Ciudad". While the drama in the book is based in the Paraguayan city of Ciudad del Este, the film transfers the story to the Bangladesh Capital city of Dhaka (incidentally, the film was originally titled "Dhaka", too).

Driven by the clear intention of cashing in on violence, Russo hasn`t bothered to check much on the subcontinent`s socio-cultural nuances (so typically Hollywood, isn`t it). The thing is Ahmedabad simply does not look like Dhaka, never mind the deliberately done Bengali hoardings and occasional Bengali lines ? in Bangaal dialect -- thrown in.

Clearly, stunt director-turned-film director Hargrave gave more attention to a highlight 12-minute action sequence filmed on Hemsworth than storytelling details. The irony is the particular sequence brings back instant recall of Daniel Craig`s by-now classic parkour chase in "Casino Royale". Even though that one came 14 years ago, it would still seem the hands-down winner in this stream of action sequences even today.

The plot is basic. Ovi (Rudraksh Jaiswal), the teenage son of a jailed drug lord (Pankaj Tripathi in a blink-and-miss role) is kidnapped by the gangster Asif (Priyanshu Painyuli). Hemsworth as the mercenary Tyler Rake is hired for a whopping sum to bring the boy back.

"Extraction" is sketchy in its intent and execution. The drama operates on a nebulous kidnapping that is never explained. It`s almost as if Joe Russo, before writing this screenplay, saw too many of those old Hindi action dramas of the eighties and nineties where you normally threw logic behind while setting up the hero as a portrait of machismo.

Indeed, Tyler the hero goes to places where even Thor the superhero wouldn`t imagine -- in the domain of the hardcore commercial Bollywood. He acquires infallible swag as he bashes up a dozen baddies single-handedly and spectacularly goes about with his mission. Oh, and he is lonely, too -- as brooding men of action normally are. Just for the heck of it, they might have given Hemsworth a love story too, and some naach-gaana!

Pankaj Tripathi is wasted, Randeep Hooda gets a few scenes of note as an action star, and those who dig world cinema will be disappointed with the raw deal Golshifteh Farahani gets. Hemsworth fans won`t be disappointed, though. It is a package tailor-made for the hunky superstar -- it is his co-production, after all.

India, more than most other parts, regularly gets to savour the best of latest action flicks. For Netflix, coming up with a formulaic action movie that looks decades old, would seem like a calculated risk. By lockdown logic, though, the film should be good enough to sail through.

Film inspired by Sachin Tendulkar, 'God of Cricket', release pushed for next year - All you need to know