The cinematography, sound effects, as well as the production quality of the film, are good and unfailing. The visuals are atmospheric. The live action frames merge seamlessly into the computer-generated images to create effective scares that can rattle you. The eerie lighting and excellent sound design enhance the horror quotient. 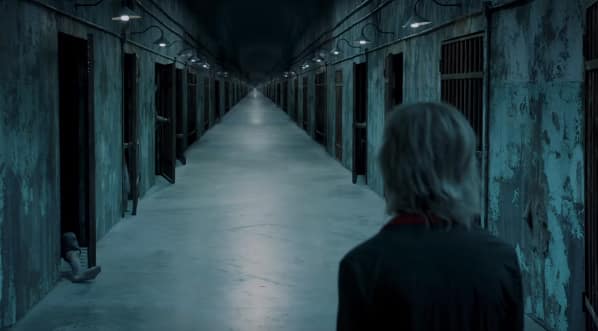 You have expectations when you visit a franchise. And "Insidious: The Last Key" -- the fourth entry of the "Insidious" series -- helmed by Adam Robitel, is spooky tale continuing the parapsychologist Elise's voyage into the "further".

Unlike the previous editions, the treatment, though complex, is lazily crafted by the director of "Insidious 3", Leigh Whannell. The horror drama is staid. The exposition verbose.

The narrative begins with a flashback, where in 1953 in New Mexico the young preteen Elise is just coming to terms with her psychic abilities, connecting with ghosts and scaring the living daylights out of her little brother. Her mother tells her, "You are blessed with a gift. You are special." But her father, for reasons revealed later, does not support her supernatural talents and punishes her whenever she admits that she has seen a ghost.

One night, her punishment gives way to a malevolent spectral encounter, and then to a tragedy that haunts her with nightmares as an adult.

In California -- 2010 -- the aging Elise (Lin Shaye) hunts ghosts and ushers away spirits alongside Tucker (Angus Sampson) and Specs (Leigh Whannell). A late night call seeks to bring her back to the house in which she grew up.

She recalls, "I don't have memories of that place, I have scars."

Nevertheless, she goes there because, "I'll go into the further, I have to help this man, for I know what he is up-against." Along the way, she discovers the truth about the ghosts and otherwise, that she saw as a child.

What follows is a recognisable tale of buried secrets and repressed horrors that reveals the truth about the ghosts and otherwise what Elise saw as a child. These sightings are elevated by a series of jump scares that are choreographed to agonising perfection.

The direction is stretched, anxious dramatisations are nearly undone by the ear-shredding stings that accompany his payoffs but he thankfully does not exploit the tactic, nor does he point a flashing arrow at every scare. Also, the creature wreaking havoc here won't blow your mind, but it is sufficiently gross.

The performance of every actor is natural and realistic. Lin Shaye as Elise Rainer is fairly consistent and remarkable. She is aptly supported by Angus Sampson and Leigh Whannell as her tech savvy assistants. Bruce Davison as Elise's brother Christian, Tessa Ferrer and Josh Stewart as her parents - Audrey and Gerard Rainer, Spencer Locke and Caitlin Gerard as her nieces Melissa and Imogen.

The few light moments in the otherwise staid film are brought by Tucker's one-liners and antics. "She is a psychic and we are her sidekick." This sentence is oft repeated to ensure that the joke penetrates.

The cinematography, sound effects, as well as the production quality of the film, are good and unfailing. The visuals are atmospheric. The live action frames merge seamlessly into the computer-generated images to create effective scares that can rattle you. The eerie lighting and excellent sound design enhance the horror quotient.

Overall, what starts off as an intriguing film ends up as an insipid horror tale that leaves no impact.