There were bold performances and wins in many top categories, including the album of the year that was given to Kacey Musgraves for "Golden Hour". 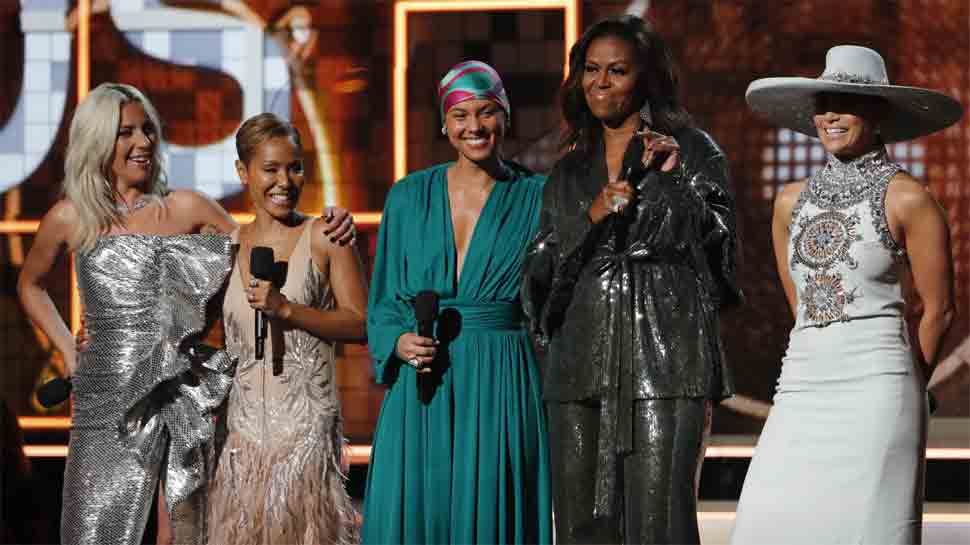 Los Angeles: A year after the Grammy Awards were criticised for its track record in gender representation, women took centrestage at the 61st edition of the annual gala here on Sunday night. There were bold performances and wins in many top categories, including the album of the year that was given to Kacey Musgraves for "Golden Hour".

The controversies of last year, when just one woman won a solo award during the telecast - and the outgoing head of the Recording Academy, the organisation behind the awards, remarked that women in music should "step up" to advance their careers - were never far from the surface of the show.

Dua Lipa, a 23-year-old British singer, alluded to that when accepting the award for best new artist, saying she was honoured to be recognised among so many other female artists, reports nytimes.com.

"I guess this year we really stepped up," Lipa said. Backstage, she said the message of greater gender equity was immediately clear to her when the nominations were announced last December.

Musgraves took home three other prizes, apart from album of the year, in the country field.

It was also the night of hip-hop artists.

Both the record and song of the year prizes - the latter awarded for songwriting - were won by Childish Gambino's "This Is America", a song about racial injustice.

It was the first hip-hop song to win either award. But Donald Glover, the actor and musician who performs as Childish Gambino, was absent.

He, along with Kendrick Lamar and Drake, the two influential young rappers in music, were offered performance spots on the show but they turned them down, reflecting the alienation from the Grammys that has taken hold among much of the upper ranks of hip-hop.

Drake was there to accept the award for best rap song, for "God's plan" from his blockbuster album "Scorpion".

Before his speech was cut off, he alluded to the gulf between the Grammy establishment and hip-hop culture.

Brandi Carlile, an earnest female singer-songwriter in an Americana style, was the dark horse of the show, getting six nominations - more than any other woman - including in the top categories of album, record and song of the year. She ended up winning three awards, though none in the top categories. She took best American roots performance for "The joke", and Americana album for "By the Way, I Forgive You".

They were the first Grammys of her career.

Lamar and Drake, the two most-nominated artists - with eight and seven nods respectively - each won only one. Lamar's "King's Dead" from the "Black Panther" soundtrack, tied for best rap performance with Anderson Paak's "Bubblin".

Childish Gambino's "This Is America" won a total of four awards, including rap/sung performance and best music video.

Then singer Alicia Keys, the host, introduced "my sisters" Lady Gaga, Jada Pinkett Smith, Michelle Obama and Jennifer Lopez. Each spoke about the inspiring power of music throughout their lives.

Among various performers, Janelle Monae performed "Make me feel" with bits of inspiration from Prince and Michael Jackson, but focused on female sexuality, surrounded by female dancers in tight rubber outfits.

With Bradley Cooper absent, "A Star Is Born" star Lady Gaga took both parts of "Shallow" herself. She won best pop duo/group performance for "Shallow".

Lopez led a Motown tribute performed as a Vegas-style revue. She was joined by Smokey Robinson and Ne-Yo, with a medley of about 10 songs jammed into six minutes and featuring gymnastic, bottom-shaking, somersaulting dancing.

Cardi B won the first Grammy of her career, best rap album for "Invasion of Privacy".

H.E.R., the stage name for Gabriella Wilson, led a slow-build version of her ballad "Hard place". She won two awards, for R&B performance (in the song "Best part") and best R&B album for her self-titled release "H.E.R".

Among the veterans, Diana Ross celebrated her 75th birthday with two hits from her solo career, "The Best Years of My Life" and "Reach Out and Touch (Somebody's Hand)", while Dolly Parton had the most cross-generational appeal, singing a five-song medley with Katy Perry, Kacey Musgraves, Miley Cyrus and Maren Morris that had Smokey Robinson and the K-pop group BTS all dancing and singing along in the crowd, reports nytimes.com.

Aijaz Khan's 'Hamid' gets a release date — Check out