In Sheila Dikshit's death, I have lost a long-time friend, colleague: Pranab Mukherjee

Former Delhi Chief Minister Sheila Dikshit passed away at the age of 81 following a cardiac arrest at the Fortis Escorts Hospital. 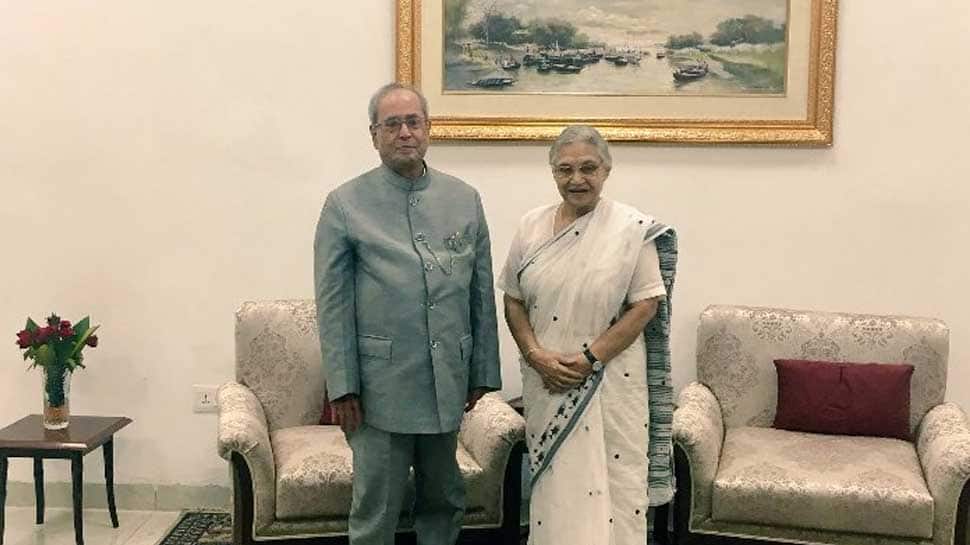 New Delhi: Former President Pranab Mukherjee on Saturday condoled the death of former Delhi Chief Minister Sheila Dikshit, who passed away at the age of 81 following a cardiac arrest.

"I am saddened and shocked at the passing away of Smt Sheila Dikshit. A former Union Minister, 3-time CM and Governor, in her death, I have lost a long-time friend and colleague. My thoughts are with her aggrieved family and friends," the former President said in a tweet.

The Arvind Kejriwal-led AAP government on Saturday declared a two-day state mourning as a mark of respect to former chief minister Sheila Dikshit, who died on Saturday following a cardiac arrest.

The announcement was made by Delhi Deputy Chief Minister Manish Sisodia who said, "Delhi government has decided to declare two-day state mourning over the demise of former Chief Minister Sheila Dikshit."

Condoling the death of senior Congress leader, Delhi Chief Minister Arvind Kejriwal tweeted, "Just now got to know about extremely terrible news about the passing away of Sheila Dikshit Ji. It's a huge loss for Delhi and her contribution will always be remembered. My heartfelt condolences to her family members. May her soul rest in peace."

Her mortal remains will be kept for the people to pay their homage at her residence in New Delhi from 6 PM today (Saturday), July 20 to 11.30 AM on Sunday, July 21," Kumar said.

The former Delhi Chief Minister was suffering from heart ailments and had undergone surgeries several times. She was brought to the Fortis Escorts Heart Institute around 10.30 AM after she suffered a cardiac arrest.

A multi-disciplinary team of doctors, led by Ashok Seth, chairman of the institute, carried out advanced resuscitative measures.

"Her condition stabilised temporarily. But she had another cardiac arrest and despite all the efforts, she died at 3.55 PM," read the statement issued by the hospital.

Describing her as a "beloved daughter of Congress party," Rahul Gandhi said that he was ''devastated'' by her demise.

Born on March 31, 1938, in Punjab's Kapurthala, Dikshit was also the longest-serving Chief Minister of Delhi, having served in office for 15 years from 1998. She was appointed Delhi Congress Committee earlier this year ahead of 2019 Lok Sabha polls.

She contested from North East Delhi but lost to BJP's Manoj Tiwari by a margin of over 3 lakhs.

Dikshit was also projected as the party's chief ministerial candidate in Uttar Pradesh before Congress allied with Samajwadi Party ahead of last assembly polls.