In Kishtwar, a cloudburst hit a remote village around 4:30 am, leaving seven people dead and 17 others injured, while at least nine people are dead, two injured and seven reported missing in the flash floods in the hilly state. 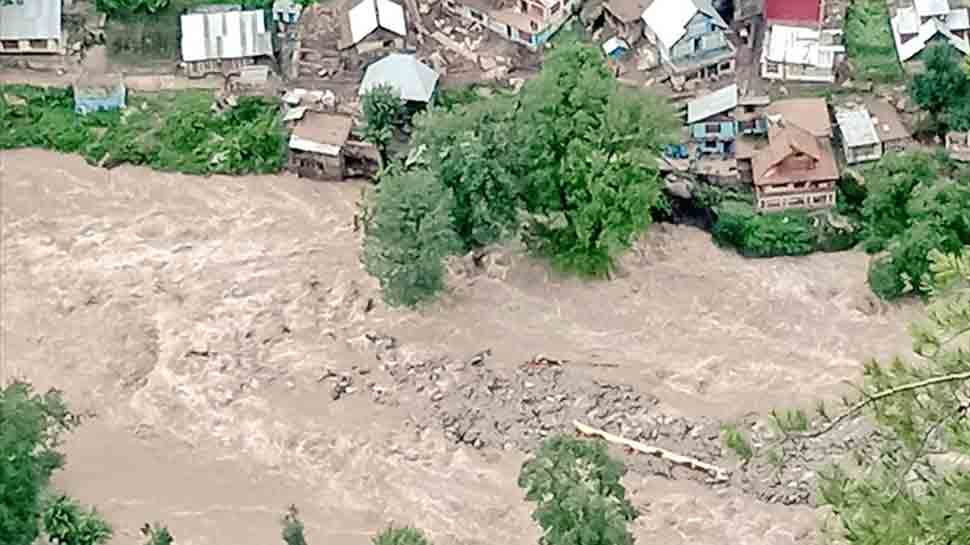 Shimla: A series of flash floods in Himachal Pradesh and the Union Territories of Jammu and Kashmir, and Ladakh killed at least 16 people on Wednesday (July 27) and damaged several residential houses, standing crops and a mini power plant, officials said.

In Kishtwar, a cloudburst hit a remote village around 4:30 am, leaving seven people dead and 17 others injured, while at least nine people are dead, two injured and seven reported missing in the flash floods in the hilly state, they said. In Ladakh, two cloudbursts hit different areas of Kargil, causing damage to a mini power project, nearly a dozen residential houses and standing crops, the officials said, adding that no loss of life was reported in the cloudbursts, which struck Sangra and Khangral on Tuesday evening.

Besides four people, including a woman, her son, a hydro project official and a Delhi tourist are feared dead in Kullu district, he added. In Kishtwar, 19 houses, 21 cow sheds and a ration depot situated on the banks of a stream, besides a bridge were damaged in the cloudburst.

A search and rescue operation by police, Army and State Disaster Response Force (SDRF) is underway to locate over 14 people who are still missing from the scene of the cloudburst at village Honzar in Dacchan tehsil, the officials said. Condoling the loss of lives due to a cloudburst in Kishtwar district, President Ram Nath Kovind said he was deeply saddened by the death of many people.

"Seven bodies were recovered from the cloudburst-hit village (Kishtwar), while 17 others were rescued in an injured condition so far," a police official told PTI. Efforts are on to locate 14 missing people, he said, adding that the condition of five of the rescued persons was reported to be critical. In Lahaul's Udaipur, two tents of labourers and a private JCB were washed away in the flash floods around 8 pm on Tuesday, Mokhta said, adding that 12 labourers were washed away in the flash floods in Tozing Nullah in Udaipur.

Of them, seven bodies recovered, two rescued with injuries and three are still missing, he added. Lahaul-Spiti Deputy Commissioner Neeraj Kumar told PTI that a team of the National Disaster Response Force (NDRF) had been requisitioned for rescuing the labourers trapped under the debris of the landslide.

In Jammu and Kashmir, Director General of Police-cum-Commandant General Home Guard, Civil Defence and SDRF, VK Singh, said two women are among the seven people killed in the cloudburst.

"One of our SDRF teams from Kishtwar reached the affected village and two more teams are on their way from Doda and Udhampur districts. Two more SDRF teams are waiting for the weather to improve to get airlifted from Jammu and Srinagar to the scene and join the rescue mission," Singh said, adding that an NDRF team from Ludhiana in Punjab is also on the way to Kishtwar.

"Inclement weather is hampering the rescue operation as our teams are waiting at the airports. The village is a three-hour journey on foot from the last road connectivity," he said.

The officials said floods have also been reported from Machail, Paddar and Bunjwah in Kishtwar district. The district development commissioner, Kishtwar, said two cloudbursts struck remote Lambard area overnight but there was no report of any loss of life.

He said 60 families were evacuated to safety from the Paddar area in view of incessant rains, which posed a threat to their homes.
A defence spokesperson said two columns of the Army were mobilised to assist the civil adminstration in rescue operation. "First Army column mobilised early morning and joined civil administration in rescue operation while a second column is reaching the scene shortly," he said.