Neither of the leaders have held back from showcasing their close personal ties, with Trump even dropping in unexpectedly at the UN Climate Action Summit on Monday to hear Modi's address. 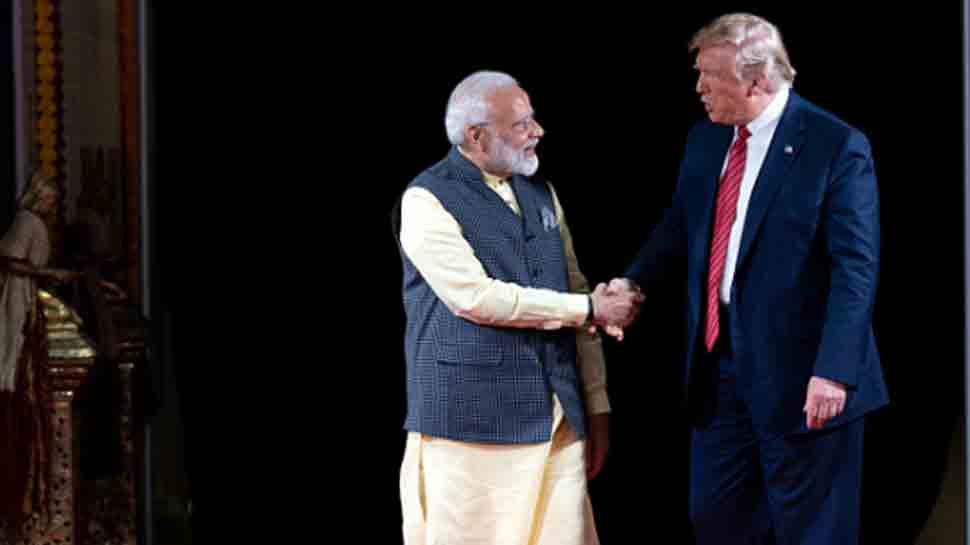 New York: After showcasing the close bond shared between them at the mega 'Howdy Modi' event in Houston, Prime Minister Narendra Modi and United States President Donald Trump are slated to meet for a bilateral here on Monday on the sidelines of the United Nations General Assembly.

Neither of the leaders have held back from showcasing their close personal ties, with Trump even dropping in unexpectedly at the UN Climate Action Summit on Monday to hear Modi's address.

He stayed at the event for merely 15 minutes -- enough to hear his 'friend's' speech -- before departing from the venue. The American leader faces criticism at home by environmental activists and Congressmen alike for his views on climate change, having pulled the US out of the Paris Agreement after coming to power.

The two did not shy away from showering compliments on each other, with Modi stating that India has a friend in the White House while referring to Trump and the former business baron calling Modi one of US' greatest friends.

"There is a great deal of synergy between the two leaders. They talk on the phone, meet on sidelines, they met in Houston the day before. Our relationship is on a continuous climb. They are going to meet again in a span of two days which shows that they value each other`s friendship and relationship and they will take the relationship ahead," Consul General of India in New York, Sandeep Chakravarty, told ANI.

However, the second engagement between the leaders also comes just a day after Trump's renewed offer of mediation on the Kashmir issue during a presser before a bilateral with Pakistan Prime Minister Imran Khan.

During the media interaction, he also spoke of an 'aggressive' statement made by Modi during Sunday`s Howdy Modi! event.

The bilateral also comes in the backdrop of the US ending the privileges that India was enjoying under the Generalised System of Preferences (GSP) program on June 5. The GSP, implemented since 1974, is the largest and oldest US trade preference scheme and it allows duty-free imports for thousands of products from designated beneficiary countries.

A bipartisan group of 44 US lawmakers had urged the Trump administration to reinstate the programme for New Delhi, following Washington`s move.Despite this, both countries have expressed confidence in their bilateral and trade ties.

"Any sort of trade negotiations that we have, any issues can be worked through because of the friendship between our two countries," US State Department spokesperson Morgan Ortagus had said earlier.

"This is the most important bilateral relationship in the world. Several US leaders also accept this and have said publicly. For the US, I believe, this the most transformed relationship. For India, the relations have gone from nothing to where it is today in the last 20 years. The trade between India and the US stood at USD 5 billion in 2000, and today it stands at almost USD 150 billion," the Consul General added.