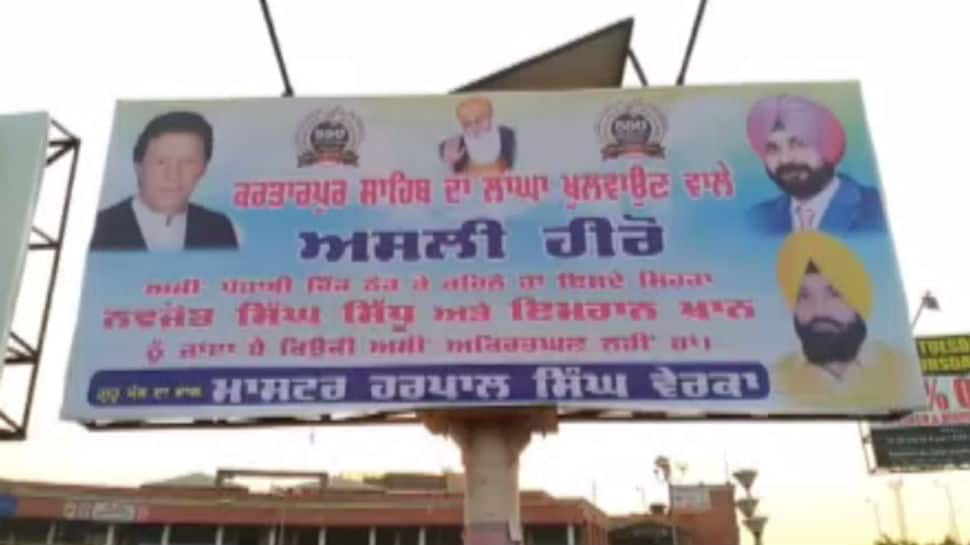 The text on the posters featuring Sidhu and Khan is in Punjabi, and translates to, "Navjot Singh Sidhu and Imran Khan are the real heroes for opening Kartarpur Corridor."

However, the hoardings, which were put on Tuesday, were immediately taken down within hours of their appearance.

The development comes after the Pakistan PM sent a formal invitation to Sidhu to join the inaugural ceremony of the Kartarpur Corridor, which is slated to be held on November 9.

Sidhu had expressed his willingness to attend the inaugural ceremony and hence, wrote to Punjab Chief Minister Captain Amarinder Singh and External Affairs Minister S Jaishankar on Saturday, requesting permission to visit Pakistan for the same.

"It is brought to your kind notice that I have been invited by the Pakistan government for the opening ceremony of Kartarpur Corridor on November 9, 2019. As a humble Sikh, it shall be a great honour to pay obeisance to our great Guru Baba Nanak on this historic occasion and connect to our roots. Therefore, I may be permitted to visit Pakistan for this auspicious occasion," he wrote.

Singh had forwarded Sidhu's request to the Chief Secretary of the State for necessary action in the matter. However, External Affairs Ministry spokesperson Raveesh Kumar had recently cleared that invites from Pakistan for the inaugural ceremony would have to seek political clearance.

Sidhu has not been included in a Congress delegation which will be visiting the gurdwara on its inauguration day. He had, however, earlier attended the ground-breaking ceremony of the Kartarpur Corridor.

A seven-member Congress delegation, constituted by Sonia Gandhi and led by former prime minister Manmohan Singh is due to visit Kartarpur Sahib on November 9.

His visit to Pakistan in 2018 during the swearing-in ceremony of Imran Khan had was heavily criticised after he had hugged the Pakistani Army Chief General Qamar Javed Bajwa.

The Kartarpur Gurdwara is 4.7 kilometres from the India- Pakistan border. It is believed to have been built on the site where Guru Nanak died in the 16th century.

Prime Minister Narendra Modi will inaugurate the Kartarpur Corridor on November 9 and dispatch the first lot of pilgrims to visit Kartarpur Sahib Gurdwara on the occasion of the 550th birth anniversary celebrations of Guru Nanak Dev that falls on November 12.

Meanwhile, Intelligence Agencies report on Wednesday revealed that infiltration of a fresh group of terrorists has been noticed recently in Dera Babak Nanak of Punjab where Kartarpur Corridor inauguration is scheduled.