The Indian Space Research Organisation (ISRO) on Sunday (February 28, 2021) successfully launched the Amazonia-1 satellite along with 18 other co-passenger satellites through PSLV-C51 from the Satish Dhawan Space Centre (SDSC) SHAR, Sriharikota. It was launch as per the tentative scheduled at 10:24 AM. 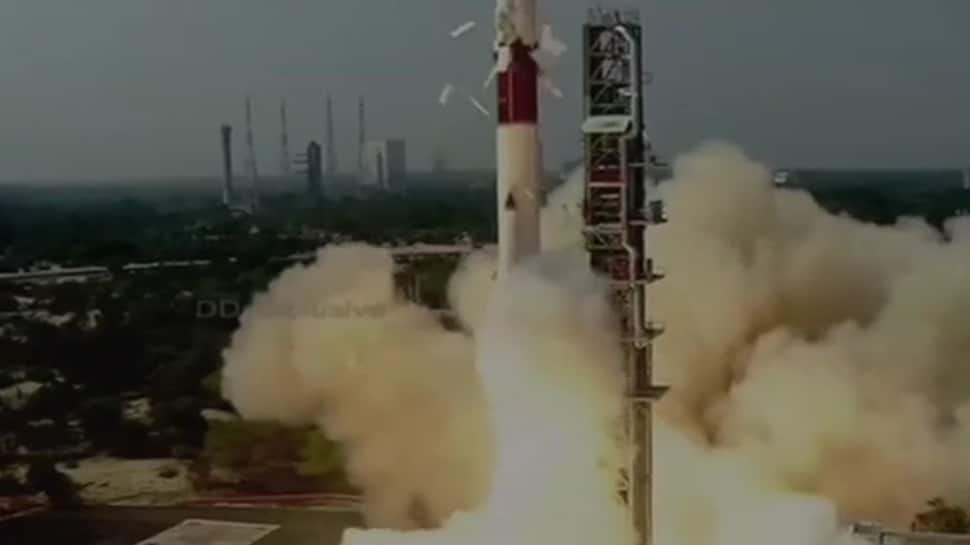 New Delhi: The Indian Space Research Organisation (ISRO) on Sunday (February 28, 2021) successfully launched the Amazonia-1 satellite along with 18 other co-passenger satellites through PSLV-C51 from the Satish Dhawan Space Centre (SDSC) SHAR, Sriharikota. It was launched as per the tentative scheduled at 10:24 AM.

The 637-kg Amazonia-1 is the first Brazilian satellite to be launched from India.

As per reports, a picture of Prime Minister Narendra Modi has also been engraved on the top panel of this spacecraft to show 'solidarity and gratitude for PM's Aatmanirbhar Bharat initiative and space privatisation. A 'Bhagavad Gita' is also reportedly sent in an SD (secured digital) card.

With the success of this mission, India has put 342 foreign satellites of 34 countries in Orbit, on a commercial basis.

"In this mission, India and ISRO, feel extremely proud to launch the first satellite designed, integrated by Brazil. The satellite is in very good health. I congratulate the Brazilian team," ANI quoted ISRO Chief K Sivan as saying.

He also informed that ISRO has 14 missions lined up for the year 2021 which includes seven launch vehicles, six Satellites and the first unmanned trial of India's ambitious manned spaceflight programme 'Gaganyaan'.

This was India's first space mission in 2021 and is also reportedly one of the longest for a PSLV rocket.

PSLV-C51/Amazonia-1 is the first dedicated commercial mission of NewSpace India Limited (NSIL), a Government of India company under the Department of Space. The NSIL is undertaking this mission under a commercial arrangement with Spaceflight Inc USA.

The Amazonia-1 is the optical earth observation satellite of the National Institute for Space Research (INPE).

According to ISRO, this satellite would further strengthen the existing structure by providing remote sensing data to users for monitoring deforestation in the Amazon region and analysis of diversified agriculture across the Brazilian territory.

On the other hand, the 18 co-passenger satellites include four from IN-SPACe (three UNITYsats from a consortium of three Indian academic institutes and One Satish Dhawan Sat from Space Kidz India) and 14 from NSIL.

(With inputs from Sidharth MP)

Rajasthan government to give employment to 153 extraordinary sportspersons