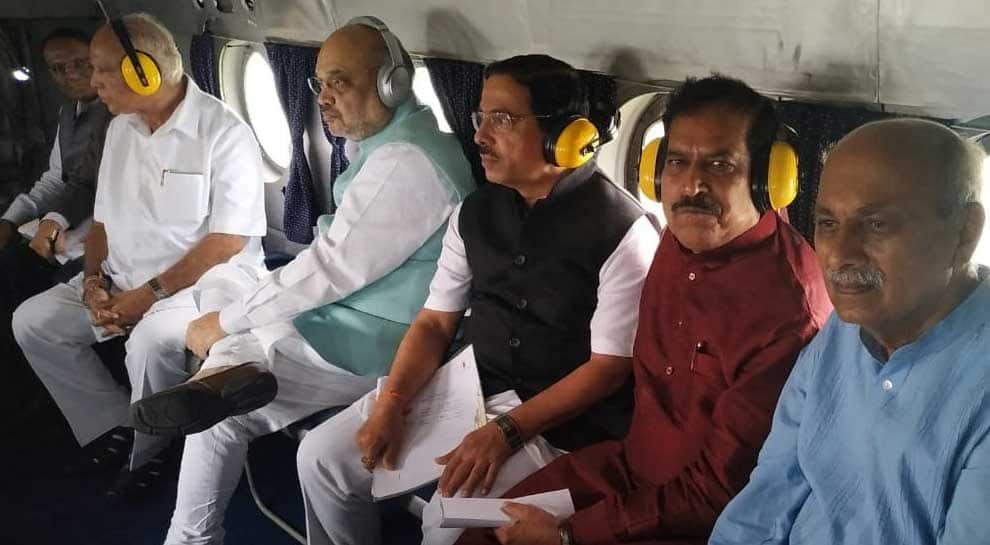 BELAGAVI: Union Home Minister Amit Shah on Sunday conducted an aerial survey of the flood-affected areas of Karnataka. Shah had reached Karnataka's Belagavi around 2.30 PM before surveying the flood-prone areas in the district.

After conducting the aerial survey, Yediurappa will meet senior officials in the presence of Shah at 4.30 PM at Sambra Airport in Belagavi to evaluate rescue & rehabilitation measures.

The Chief Minister had on Saturday announced Rs 5 lakh compensation to next of kin of the people who lost their lives in the worst floods that have crippled the state in the recent days.

Yediurappa informed that over two lakh people have been evacuated from flood-affected areas and 1.61 lakh people housed in 664 relief camps across the state. At least 24 people have lost their lives while around 1,024 villages in 80 talukas of 17 districts have been affected due to floods caused by incessant rains in the region.

The Chief Minister further informed that the floods had damaged around 3.75 lakh hectare crop area, 14,000 houses and 478 km of power lines.

Ahead of Shah, Union Finance Minister Nirmala Sitharaman had visited the flood-affected areas in Belgaum.

In view of the flood situation, all schools and colleges - government and private - in affected flood-hit districts have been ordered to remain closed till August 15.

The Indian Navy, which is engaged in the relief and rescue operation in Karnataka, on Sunday said that the water in flood-hit districts of Belagavi and Uttar Kannada has started receding and the situation will soon be back to normal.

"As of yesterday evening, the water has started receding. It is appreciated that the situation will be back to normal," Rear Admiral Mahesh Singh, Flag Officer Commanding Karnataka Naval Area, had told ANI.

Amid all this, former Karnataka chief minister and Congress leader Siddaramaiah had accused the Centre of ignoring the flood situation in Karnataka and demanded an assistance of Rs 5,000 crore.

"The Central government is still sleeping even after seeing the severity of floods and the damages due to floods. It should immediately declare this as a national disaster. Prime Minister Narendra Modi should visit these places, conduct a scientific survey and release Rs 5,000 crore," Siddaramaiah said in a tweet.

Accusing the centre of giving Karnataka a "step-motherly treatment", he said that the funds released so far are not even sufficient for the first-aid.