Leaders across parties mourned the untimely death of the much-beloved politician, expressing loss and grief. 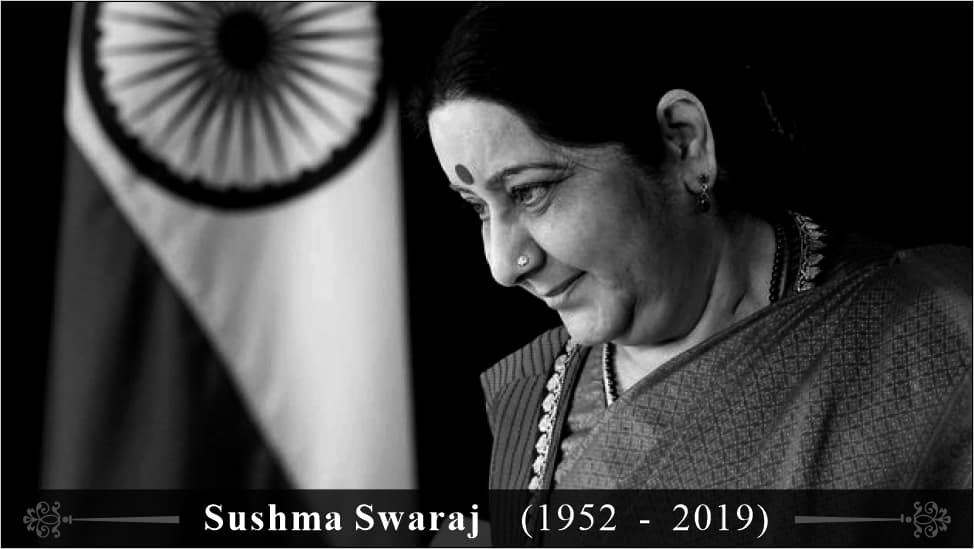 Sushma Swaraj's sudden demise has created shock ripples across the nation. Many political leaders across parties mourned the untimely death of the much-beloved politician, expressing loss and grief. A throng of top leaders and celebrities reached her Delhi residence to pay their last respects on Wednesday morning.

In a series of tweets, Prime Minister Narendra Modi said, “I can’t forget the manner in which Sushma Ji worked tirelessly as EAM in the last 5 years. Even when her health was not good, she would do everything possible to do justice to her work and remain up to date with matters of her Ministry. The spirit and commitment was unparalleled.”

Expressing condolences on Swaraj's death, veteran Bharatiya Janata Party (BJP) leader Lal Krishna Advani said, “The nation has lost a remarkable leader. To me, it is an irreparable loss and I will miss Sushmaji`s presence immensely. May her soul rest in peace. My heartfelt condolences to Swaraj Ji, Bansuri and all members of her family. Om Shanti.” Advani recalled his time as the party president in the eighties when he inducted a young Sushma Swaraj into his team, calling her a `promising young activist`.

"Sushmaji was someone who I have known and worked with since the beginning of her illustrious innings in the Bharatiya Janata Party. When I was the President of the BJP in the eighties, she was a promising young activist who I had inducted into my team," said Advani.

Home Minister Amit Shah says Sushma Swaraj's untimely demise is a very sad moment for the Indian politics. Speaking to mediapersons, Shah said that all BJP workers, including him, were in grief. He further said that Sushma excelled in all roles - Delhi CM, Leader of Opposition, External Affairs Minister, adding the void will not be filled anytime soon.

West Bengal Chief Minister Mamata Banerjee tweeted, “Deeply saddened, shocked at sudden passing away of #SushmaSwaraj ji. I knew her since 1990s. Even though our ideologies differed, we shared many cordial times in Parliament. An outstanding politician,leader,good human being. Will miss her.Condolences to her family/admirers.”

Deeply saddened, shocked at the sudden passing away of Sushma Swaraj Ji.I knew her since the 1990s.Even though our ideologies differed, we shared many cordial times in Parliament. An outstanding politician, leader, good human being.Will miss her.Condolences to her family/admirers

"Saddening... May God give peace to her soul and strength to her family. Sushmaji will always be remembered for efficient leadership and excellent efficiency," he tweeted in Hindi.

Bahujan Samaj Party (BSP) chief Mayawati also took to Twitter and wrote: "The sudden demise of senior BJP leader and former External Affairs Minister Sushma Swaraj is saddening. She was not only a skilled politician and a great administrator but also a very social woman. Deepest condolence to her family members."

SushmaSwaraj- a political leader of great sense of dignity, commitment and competence. Serving the Nation was her only mission. She will be missed. Condolences and blessings. -Sg#SushmaSwaraj #SushmaJi

“Deeply shocked to learn of the passing away of Smt Sushma Swaraj. Difficult to accept this news. The whole nation grieves, the Foreign Ministry even more so,” tweeted External Affairs Minister S Jaishankar.

Congress leader Rahul Gandhi also expressed shock. “I’m shocked to hear about the demise of Sushma Swaraj Ji, an extraordinary political leader, a gifted orator & an exceptional Parliamentarian, with friendships across party lines. My condolences to her family in this hour of grief. May her soul rest in peace. Om Shanti,” he tweeted.

Nobel laureate Kailash Satyarthi spoke on how the senior leader influenced him. “Sushma Swaraj`s sensitiveness influenced me a lot and was the reason for our long term relations. She had always advised me like an elder sister. She loved my son very much and always showered him with love. My condolence is with her family," he said. "I had last met her at the President`s house and we discussed the celebration of Gandhi`s 150th birth anniversary. She was not well from a very long time and we never thought that she will leave us this early. I will pray to God to give peace to her," he added.