The fresh proposal includes the government's reply to the three conditions that the Governor had earlier raised in case the session is convened, according to sources. 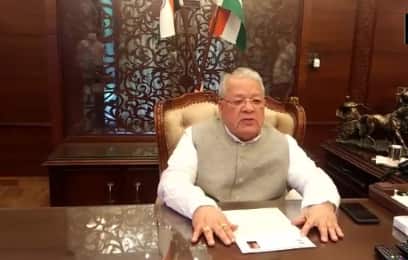 New Delhi: The Rajasthan government on Tuesday (July 28) forwarded a revised proposal to Governor Kalraj Mishra seeking to convene assembly session from 31st July. The fresh proposal includes the government's reply to the three conditions that the Governor had earlier raised in case the session is convened, according to sources.

Chief Minister Ashok Gehlot today chaired the Cabinet meeting to discuss the points raised by the Governor. The revised note has been forwarded to the Raj Bhawan today after approval from the Cabinet, a PTI report said citing official sources.

The government note is learned to have not mentioned if it wants to seek a vote of confidence in the assembly session.

On the issue of 21-day notice required for calling the session, Rajasthan Transport Minister Pratap Singh said that 10 days have already passed and asked why did the governor not give a date if he is talking the notice.

Speaking to reporters in Jaipur, the minister said that it is for the Business Advisory Committee of the assembly to decide when asked about the agenda of the session.

Regarding seating arrangement as per social distancing norms in the assembly, he said that it was for the Speaker to look after.

Criticising the BJP, the minister said that the party has made it a prestige issue, adding that the BJP stands exposed.

In a related development, BJP leader Madan Dilawar today filed another petition before the Rajasthan High Court against the merger of six Bahujan Samaj Party (BSP) MLAs in the state with Congress party. This is the third petition against the merger.

Earlier in the day, Dilawar had filed a second petition in the Rajasthan High Court challenging the merger of MLAs.

Notably, Dilawar had also sat on a protest in the office of the Vidhan Sabha Secretary yesterday demanding a copy of the order given by Rajasthan Speaker on the merger.

In a relief for Chief Minister Ashok Gehlot-led government, the High Court on Monday dismissed Dilawar`s plea against the merger.

Dilawar moved the petition in the High Court seeking directions to quash the merger of six BSP MLAs with the Congress party, which had helped the ruling party in retaining a majority in the Rajasthan Legislative Assembly.