The agencies have warned that the possible terror attacks may be carried out in the night and early morning hours.

JAMMU: A high alert has been issued across Jammu and Kashmir in the wake of the deadly suicide attack on CRPF convoy in Pulwama district in which at least 44 CRPF personnel were killed and several others critically injured.

The intelligence agencies have warned that Pakistan-backed terrorist outfit may target police establishment and camps of the security forces to build up more pressure on India.

The agencies have warned that the possible attacks may be carried out in the night and early morning hours. 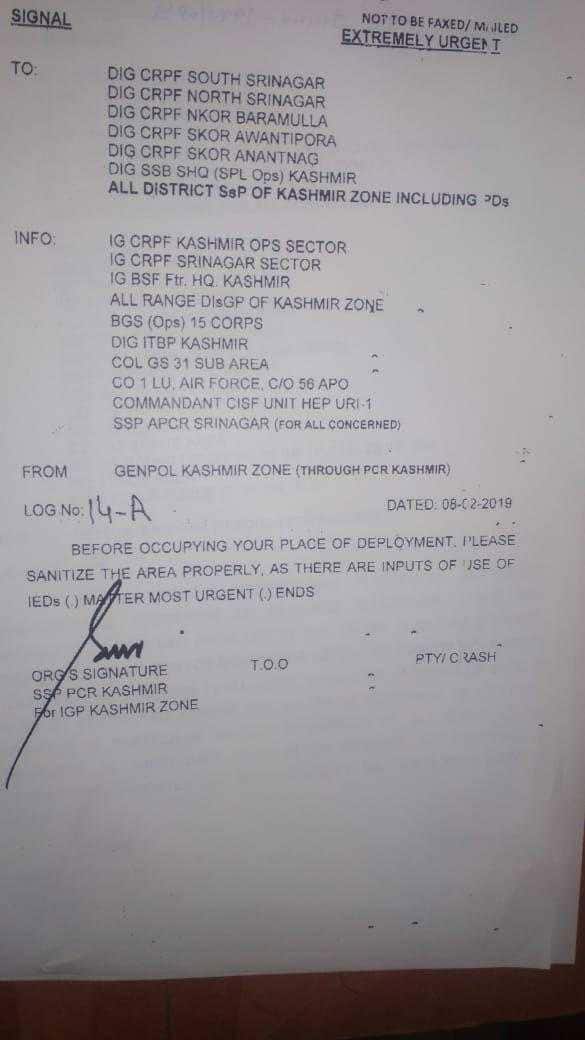 Intelligence agencies had on February 8 issued alert urging the security forces to exercise maximum restraint and increase patrolling and vigilance in sensitive areas.

Meanwhile, mobile and internet services have also been suspended in the parts of Jammu and Kashmir.

Nation-wide protest ensued in different parts on the country against the merciless killing of as many as 44 CRPF personnel on Thursday in one of the worst suicide attacks on the security forces in Jammu and Kashmir`s Pulwama district.

A large number of youths protested in Jammu and Kashmir over the incident. "We are protesting against the killing of our 44 CRPF jawans. This is shameful. There should be stern actions now, there should be another surgical strike," some protesters said.

One of the workers said, "Very painful and shameful incident. The terrorists are bred by Pakistan. We want Prime Minister Modi to attack Pakistan and teach it a lesson."

Similar protests were reported from states like Maharashtra, Uttar Pradesh, Rajasthan, Madhya Pradesh where protesters condemned the Pulwama suicide attack in the strongest terms and demanded justice for the martyred CRPF troopers and their families.

In the deadliest attack on security forces in Kashmir, around 44 CRPF personnel were killed on Thursday when their convoy was targeted by a suspected suicide bomber of Pakistan-backed Jaish-e-Mohammad in Pulwama district on the Srinagar-Jammu National Highway.

The convoy of 78 buses, in which around 2500 CRPF personnel were travelling from Jammu to Srinagar, came under attack at around 3.15 PM at Ladhu Modi Lethpora.

This is the deadliest attack on security forces in Jammu and Kashmir so far.

Earlier in September 2016, an Army camp was stormed by terrorists in Uri, killing 19 soldiers.

Prior to that, 28 BSF personnel were killed in an attack on a convoy of the paramilitary force in 2004.

Strongly condemning the attack, the Prime Minister termed it as “despicable” and asserted, “The sacrifices of our brave security personnel shall not go in vain. The entire nation stands shoulder to shoulder with the families of the brave martyrs.”

Several countries from across the globe stood in support of India in the wake of a deadly suicide attack on a CRPF convoy in Jammu and Kashmir`s Pulwama district that killed 44 security personnel on Thursday.