During the era of Mughal emperor Babur, the Babri Masjid was built after desecrating the Ram temple in the year 1528. After the Mughal rule, the British also ruled India for almost 200 years, and then in independent India, 73 years also passed but the dream of crore remained unfulfilled. 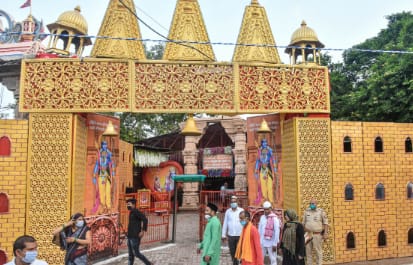 New Delhi: After nearly 500 years, historical wrong is being repaired with the Bhoomi Pujan ceremony of Ram Temple in Ayodhya on August 5, and the preparations for the historic occasion have been completed. Related to faith and emotions of crores of Indians, the Ram temple is coming to reality after the struggle of about 25 generations.

The DNA analysis today revolves around the Ram Mandir movement and other aspects that led to the fulfillment of this dream in modern India under the leadership of Prime Minister Narendra Modi, who will participate in the Bhoomi Pujan ceremony.

During the era of Mughal emperor Babur, the Babri Masjid was built after desecrating the Ram temple in the year 1528. After the Mughal rule, the British also ruled India for almost 200 years, and then in independent India, 73 years also passed but the dream of crore remained unfulfilled.

The Ram Mandir movement that started in 1990 later became a mass movement and with the Supreme Court decision in November 2019, the issue has been permanently resolved. Several people associated with the movement lost hope that the controversial issue would find a solution in their lifetime because of ongoing politics in the name of this Madir and Masjid.

In independent India, this will be the second occasion when a grand temple will be rebuilt. The Somnath temple in Gujarat was rebuilt soon after independence. The then President, Dr Rajendra Prasad, had inaugurated Somnath temple, and now Prime Minister Narendra Modi will participate in the Bhoomi Pujan ceremony of Ram Temple in Ayodhya.

The questions are being raised as to what will happen if the Ram temple is built. It will not only restore faith and authority but will also add to India's soft power. Faith in Lord Rama is not limited to India, but people in many countries across the world have faith in him. This is the reason that holy soil, bricks, and holy water from rivers are being brought from countries for the construction of Ram temple.

In Southeast Asia, countries like Thailand, Cambodia, Laos, Myanmar, Indonesia, Malaysia associate them with Lord Ram, while folk songs based on the themes of the Ramayana and Ramlila are staged in countries such as Sri Lanka and Myanmar. Several places in Myanmar are named after Ram, while Ramkatha is still practised in Malaysia, where Muslims still associate the names of Lord Rama and Lakshmana with their names.

The tradition of ruling the country keeping charan Paduka (footsteps) of Lord Rama is still followed in Thailand, whose ruling dynasty calls them to be the descendants of Lors Rama. Ramayana is still recited at many places in Cambodia.

Apart from this, about 30 million Indian diasporas living in different parts of the world. Most of these people believe and worship Lord Rama. It is said that wherever Indians go, they carry their culture along and spread it to outside countries. The construction of Ram temple will give a new sense of pride to these overseas Indians in their religion and culture.

This grand Ram temple of Lord Ram will also add to India's soft power and is expected to boost tourism India as crores will visit the place. This will also add a new chapter to India's history, which will be divided into two parts. One will be pre-Ram temple era and the second part will belong to the post-Ram temple period.

Prime Minister Narendra Modi was closely associated with the Ram Mandir movement. He was also part of the famous Rath Yatra started in 1990 by senior BJP leader LK Advani from Somnath to Ayodhya. The responsibility of this rath yatra was with Narendra Modi, who was then organization secretary of the Gujarat BJP.

Sri Ramjanmbhoomi Teerth Kshetra Trust has invited only 175 guests in the Bhoomi Pujan ceremony for the Ram temple in Ayodhya on August 5. The esteemed gathering will attend the historic occasion when Prime Minister Narendra Modi will perform the ceremony.

PM Modi will worship 9 shilas (stones), associated with Ram temple movement during 1989-90, to be placed during the Bhoomi Pujan. One of these shilas will be kept in the sanctum sanctorum, while the rest will be placed in other places of the temple.

According to the Trust's general secretary, Champat Rai, 175 eminent guests, including 135 seers belonging to as many spiritual traditions, would be present at the programme. Some eminent citizens of the temple town have also been invited.

Salil Singhal, the nephew of late VHP leader Ashok Singhal, will be the "yajmaan" (ritual patron) at the ceremony. Hindu seers from Nepal have also been invited as Janakpur has relations with Bihar, Uttar Pradesh, and Ayodhya, Rai added.

Soil and water from 2000 different holy places across the country have reached Ayodhya. The holy water is being brought from 100 rivers, including key rivers like Ganga, Yamuna, Narmada, Godavari, Krishna, Kaveri, Indus, Brahmaputra, Jhelum, Sutlej, Ravi, and Vyas.

Ahead of the Bhoomi Pujan ceremony, Ram Archana will start on August 4 at 8:30 am in the Ram Janmabhoomi campus in which Lord Rama, King Dasharatha, Queen Kaushalya will be worshiped for about 5:30 hours along with those who helped Lord Ram in his fight against Lanka King Ravana.

'Gauri Ganesh' puja was performed on Monday at 8 am amid chanting of mantras by 11 priests from Kashi, Kanchi, and Delhi. 'Ramayana path' was also organised in various other temples of Ayodhya.

Preparations have also been made to decorate Ramlalla for the three-day ritual of Bhoomi Poojan. Every day Ramlalla will be dressed up in different colors to suit the planets and constellations. These clothes have already been handed over to Acharya Satendra Das. On Wednesday, Ramlalla will wear green clothes, while an extra set of saffron cloth has also been kept ready.

The entire holy city is painted in yellow colour before the Bhoomi Pujan. The walls of different places have also been ornamented with beautiful paintings related to the life of Lor Rama.