Union Ministers Nitin Gadkari and Rajnath Singh welcomed the Supreme Court verdict on the disputed Ayodhya land, and called for “peace and harmony”. 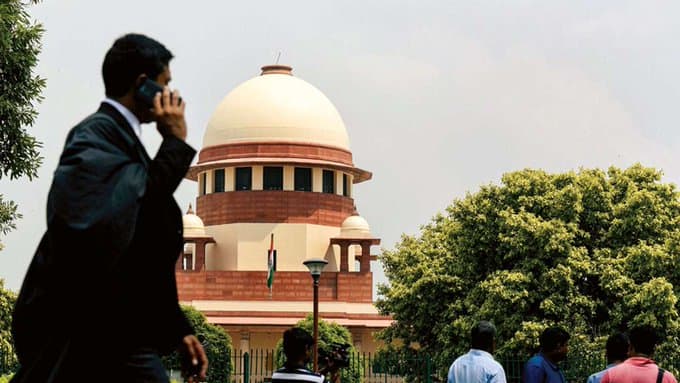 The Supreme Court on Saturday gave a historic verdict in the decades-old Ayodhya's Ram Janmabhoomi-Babri Masjid land dispute case, directing that Hindus will get the disputed land subject to conditions. The inner courtyard will be handed over to a Centre-led Trust, while a suitable plot of land, measuring 5 acres, will be given to Sunni Waqf Board. The verdict comes nine years after the Allahabad High Court had ordered that the disputed land be equally divided between the three parties — Ram Lalla, Sunni Waqf Board, and the Nirmohi Akhara.

Union Ministers Nitin Gadkari and Rajnath Singh welcomed the Supreme Court verdict on the disputed Ayodhya land, and called for “peace and harmony”.

Delhi Chief minister Arvind Kejriwal has also appealed for peace, and tweeted, "After hearing the arguments of all the parties, the five judges of the SC Bench gave their unanimously verdict today. We welcome the SC decision. The SC has gave its decision on several decades of controversy. The years old dispute ended today. I appeal to all people to maintain peace and harmony."

Union Minister Nitin Gadkari is quoted by ANI as saying "Everyone must accept the Supreme Court judgement and maintain peace."

Bihar Chief Minister Nitish Kumar said, "Hon'ble Supreme Court has given a clear verdict. We must respect it. This is necessary for mutual harmony.

The Congress Working Committee passed a resolution on the Ayodhya verdict saying "The Indian National Congress respects the verdict of the Supreme Court in the Ayodhya case. We appeal to all the parties concerned and to all communities to abide by the secular values and spirit of fraternity enshrined in our Constitution and to maintain peace and harmony. It is the responsibility of each one of us to reaffirm our tradition of mutual respect and unity among all that has defined our society through the ages."

Union Home Minister Amit Shah welcomed the Supreme Court on Ayodhya, and appealed to people of all communities to accept the decision. He tweeted, "I welcome the Supreme Court's unanimous decision on Shri Ram Janmabhoomi. I appeal to people of all communities and religions to accept this decision with ease and remain committed to our pledge of 'Ek Bharat-Shreshtha Bharat', with peace and harmony."

Rashtriya Janata Dal (RJD) leader Tejashwi Yadav on Saturday said that the whole country was waiting to hear the Supreme Court verdict on the Ram Janmabhoomi-Babri Masjid and now that it was out, it should be respected by one and all. "Everyone was waiting for the Supreme Court verdict and now everybody should respect it. All the temples, mosques and churches in the country are ours, and we have never thought they were not ours. Now the political leaders and parties should focus on making better schools, colleges and hospitals in the country. We had already taken the decision that we will respect the SC verdict," Tejashwi said.

Senior BJP leader Uma Bharti too welcomed the apex court's verdict on matter and said, "A tribute to all those who laid down their lives for this work and a tribute to Advani ji, under whose leadership all of us put our best at stake for this great work."

Senior Congress leader Jyotiraditya Scindia appealed that all should accept the decision with patience and seriousness and maintain harmony. "I respect the verdict of the Supreme Court. All should accept the verdict with seriousness and patience. It is our collective responsibility to maintain harmony, brotherhood and peace so that peace and harmony is maintained in the country which has strong foundations for it," Scindia said.

RSS chief Mohan Bhagwat appeals to all section to maintain peace and harmony and thanked the Indian judicial system for the historic judgement on the 100-year-old land dispute case. "We welcome the decision of Supreme Court. This case was going on for decades and it has reached the right conclusion. We congratulate all the advocates who have worked tirelessly all these years for it. We also welcome everyone's efforts to maintain peace and harmony in society. The Supreme Court verdict on Ayodhya land dispute case shouldn't be seen as a win or loss by anyone. We should all about the past and work united. Irrespective of religion, we are all citizens of India. We must live together in unison. We must end all the differences," he said.