Bhutan has a special place in the hearts of Indians: PM Narendra Modi

PM Modi, who is on a 2-day visit to the south Asian country, said, "I am very happy that I have come to Bhutan soon after the beginning of my second term." 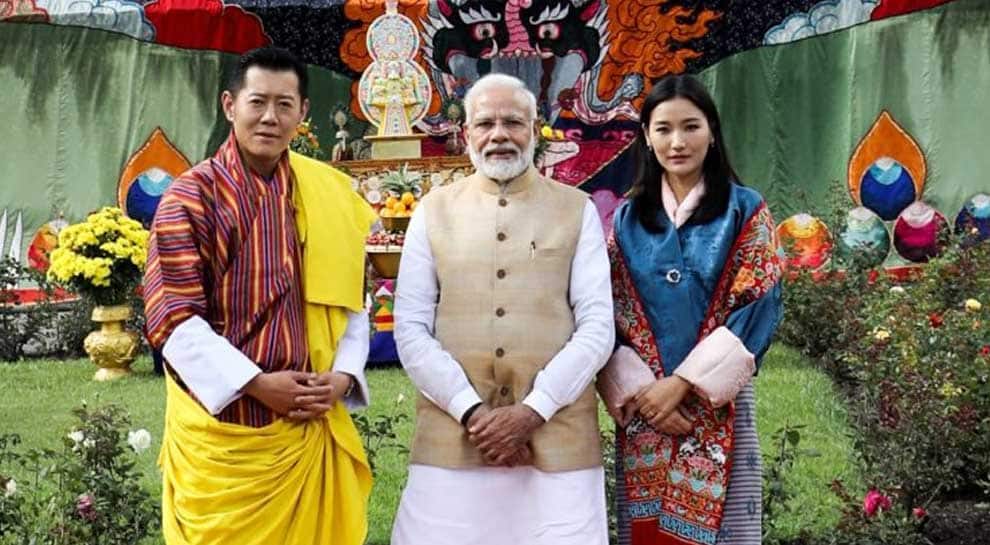 New Delhi: Lauding Bhutan's outlook on the environment and economic development, Prime Minister Narendra Modi on Saturday said, "Bhutan has a special place in the hearts of 130 crore Indians...and India will be a key partner in the country's economic growth according to the priorities of Bhutan"

PM Modi, who is on a 2-day visit to the south Asian country, said, "I am very happy that I have come to Bhutan soon after the beginning of my second term."

In a rare honour, press statements were done at the Simtokha Dzong in front of the statue of Zhabdrung Rinpoche or Ngawang Namgyal, who united Bhutan as a country.

Simtokha Dzong is the oldest monastery castle of Bhutan built by Ngawang Namgyal.

Commending PM Modi's ''strong and dynamic leadership" which can take "bold decisions", Bhutan PM Lotay Tshering said, "India's stature and influence has grown in the international arena and it has emerged as a global leader"

Indian and Bhutanese leaders inaugurated 720MW Mangdechhu hydropower, a ground earth station build by ISRO at the cost of Rs 7 Crore in Thimpu, and rolled out RuPay card.

A total 9 MoUs were also exchanged by both sides.

India has also announced that it will increase LPG supply to the South Asian country from 700 to 1000 MT per month and additional USD 100 million will be made available to Bhutan under a standby swap arrangement to meet the foreign exchange requirement.

Earlier on his arrival at the Paro Airport on Saturday, he was received by Bhutanese PM. On the second day of the visit, he will address the students of the Royal University of Bhutan