Over 2.85 crore voters will decide the fate of 1,463 candidates who are in the fray for the second phase of polling. 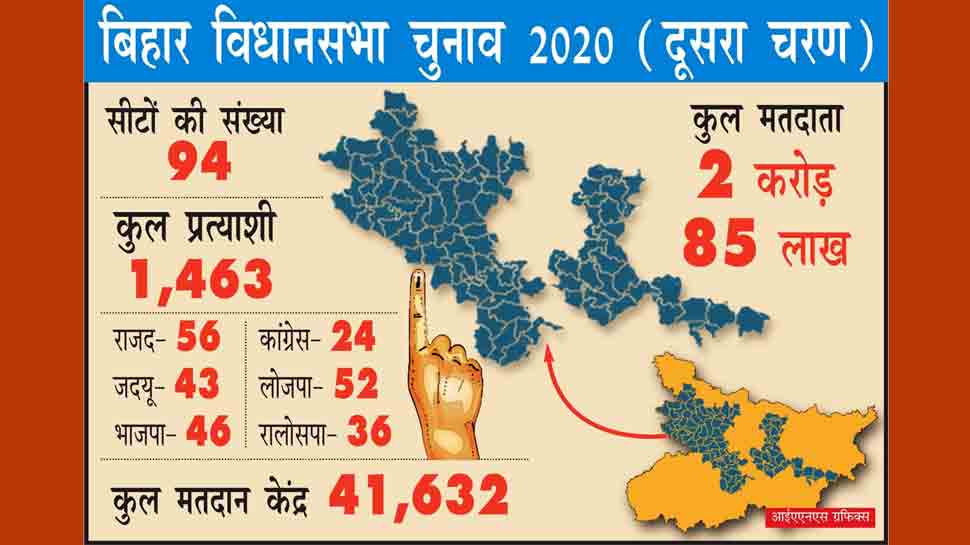 PATNA: At least 94 legislative assembly constituencies in 17 districts in Bihar have gone to polls during the second phase of ongoing assembly elections in the state. According to reports, over 2.85 crore voters will decide the fate of 1,463 candidates who are in the fray for the second phase of polling.

Maharajganj seat has a maximum of 27 candidates in the electoral battle and Daraula with only four in the second round of Assembly polls.

Prominent contestants in the fray include Rashtriya Janata Dal leader and Grand Alliance`s chief ministerial candidate Tejashwi Yadav who is recontesting the Raghopur seat and his brother Tej Pratap in the fray in Hassanpur seat in Samastipur district.

As many as 41,362 polling stations have been set up across 17 districts, all of which except Patna, Bhagalpur, and Nalanda are situated north of the Ganges.

Polling in 94 Assembly segments in 17 districts will be held from 7 am till 6 pm. The polling in some sensitive constituencies will end at 4 pm as per the Election Commission (EC) directions.

Ministers Nandkishore Yadav, Randhir Singh, and Shravan Kumar are also in the fray from Patna Sahib, Madhuban and Nalanda segments. The prestige of 27 MLAs of the Grand Alliance is at stake.

The RJD has fielded 56 candidates in the second phase of elections, wherein it is in direct contest with the BJP on 27 seats and with the ally turned foe JD(U) on 25 seats. The BJP is contesting 46 seats and the JD(U)  43 seats. The Congress is contesting 24 seats, CPI and CPM four each, Lok Janshakti Party 52 and RLSP 36 seats.

In the 2015 election, Rashtriya Janata Dal of Lalu Prasad bagged 33 of these seats, the JD(U)  30 and the Congress seven whereas the NDA won only 22 seats.

However, a lot of water has since flown down the rivers ever since. New political permutations and combinations have come into play in 2020 as compared with the 2015 polls.

Five years ago, Nitish Kumar's JD(U)  fought the elections in alliance with the RJD and the Congress, whereas the NDA had Ram Vilas Paswan's Lok Janshakti Party and Rashtriya Lok Samta Party (RLSP) in its camp.

In this poll fray, the JD(U)  has moved to the NDA camp, the LJP is fighting its own battle and the RLSP is a part of the Grand Democratic Secular Front.

Elections for the 243-seat Bihar Assembly are set to be held in three phases, out of which polling in the first phase was conducted on October 28.

After the November 3 voting for 94 seats, remaining 78 constituencies will go to polls on November 7. The counting of votes is slated for November 10.