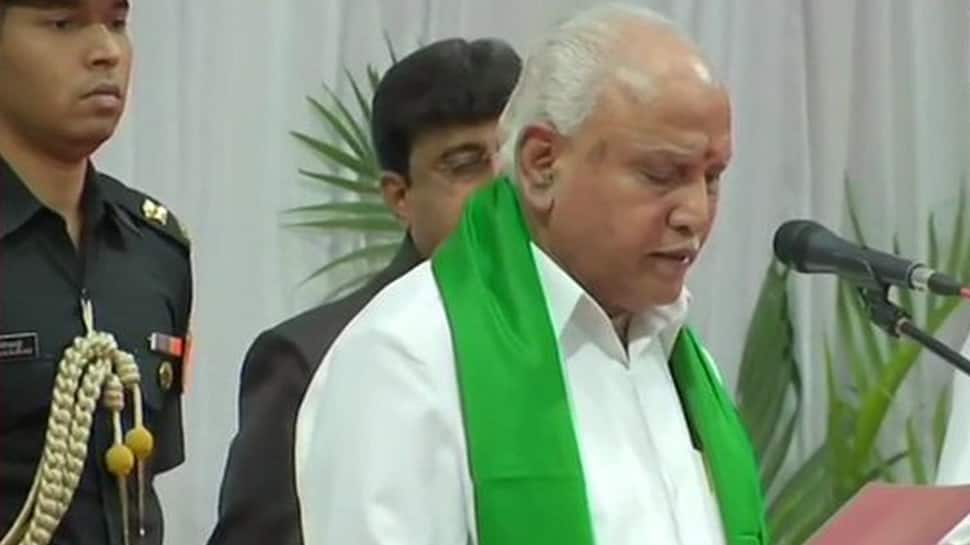 Shortly before taking oath as chief minister, Yediyurappa on Friday addressed his party workers at the state BJP headquarters and thanked the party workers for their continued support. Before heading Raj Bhavan, he met with jubilant party worker at the party office.

Surrounded by a sea of supporters, Yediyurappa accepted greetings and displayed the victory sign. Yediyurappa also visited Kadumalleshwara Temple and offered prayers there.

Earlier in the day, Governor Vajubhai Vala invited Yediyurappa to take oath as chief minister at the Raj Bhavan at 6 pm and after the latter staked claim to form the BJP government in the state.

The relations between the political leaders touched a new low in Karnataka, with the Congress and Janata Dal-Secular (JD-S) deciding to boycott the swearing-in of Yediyurappa.

"Our party`s state President Dinesh Gundu Rao has directed our leaders, former ministers and legislators to boycott Yediyurappa`s oath-taking ceremony as chief minister, as he has no moral right to assume power when his party does not have the majority in the Assembly," Congress spokesman Ravi Gowda told news agency IANS.

"I refuse to participate in this unholy event and instruct all INC Karnataka leaders not to participate either," party`s state president Dinesh Gundu Rao tweeted.

Caretaker chief minister Kumaraswamy has also decided to skip the event for personal reasons. "Though Yeddyurappa has sent an invitation for the ceremony to Kumaraswamy and our other party leaders, many have decided to stay away for various reasons," JD-S spokesman Ramesh Babu told IANS.

Yediyurappa takes oath three days after Kumaraswamy resigned on July 23 following his defeat in the floor test by six votes in the Assembly when he had put to vote his confidence motion on Tuesday at the end of four-day marathon debate.