State BJP chief B S Yeddyurappa along with a host of senior party leaders including former deputy chief minister R Ashoka, among others, spend the night at Anand Rao circle. 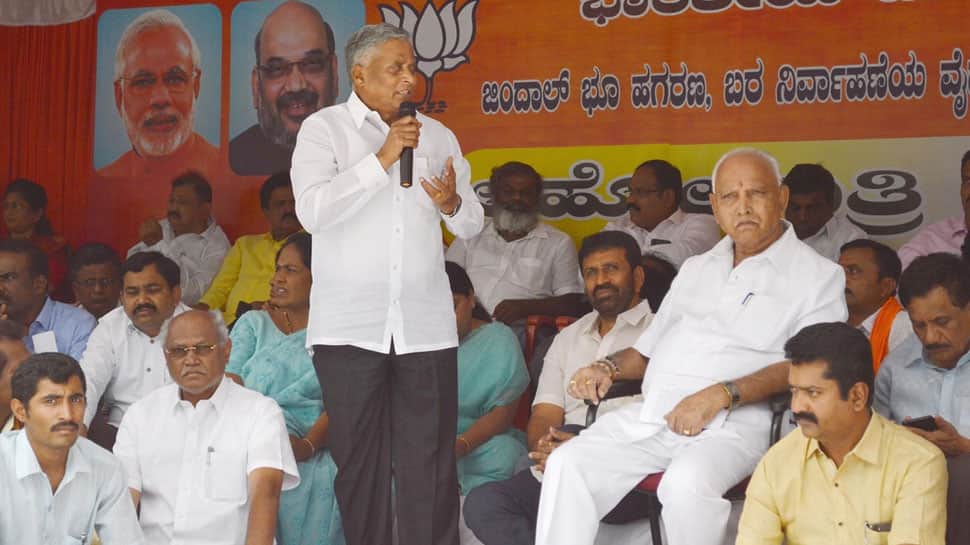 Bengaluru: The BJP's Karnataka unit, which is on a round-the-clock sit-in since Friday protesting against the sale of land to JSW Steel at Ballari and other issues, has decided to "lay siege" to Chief Minister H D Kumaraswamy's official residence on Sunday. State BJP chief B S Yeddyurappa along with a host of senior party leaders including former deputy chief minister R Ashoka, among others, spend the night at Anand Rao circle, the protest venue, as part of the stir, on Friday.

Continuing the protest for the second consecutive day, Yeddyurappa Saturday said they have decided to "lay siege to the Chief Minister's residence tomorrow." "The overnight protest will continue tonight as well, we will be here tonight..." he added. He said the protest was against government's "inconsistency" on the issue of farm loan waiver and also its "failure" in managing the drought situation.

The BJP was also opposed to sale of 3,667 acres of land to JSW Steel in Ballari, the leader of the opposition in Karnataka assembly said. Accusing the ruling Congress-JDS coalition of getting "kickbacks", for the sale of land, Yeddyurappa said "We are against the sale of land that has rich minerals without any survey being done. We are not against providing facilities to industries or continuation of lease."

The Karnataka cabinet had recently decided to convert the lease of 3,667 acres to JSW Steel into sale, in accordance with the initial agreement. Caught in a row, the state cabinet Friday decided to refer its decision to a cabinet sub-committee for reconsideration, which Yeddyurappa termed as "eyewash".

He claimed that ruling coalition leaders, including Chief Minister H D Kumaraswamy, were worried about cabinet expansion when there was drought in different parts of the state.

Kumaraswamy and his ministers have not travelled to the affected areas to assess the situation there, the BJP leader alleged. Yeddyurappa also termed Kumaraswamy's scheduled "Grama Vastvya" (overnight stay in villages) programme to make the administration more effective, as "drama".