The Environment Pollution (Prevention and Control) Authority (EPCA) on Monday announced a blanket ban on bursting firecrackers for the entire winter season in Delhi-NCR region, in its efforts to tackle the deteriorating air quality levels in the national capital.

NEW DELHI: The Environment Pollution (Prevention and Control) Authority (EPCA) on Monday announced a blanket ban on bursting firecrackers for the entire winter season in Delhi-NCR region, in its efforts to tackle the deteriorating air quality levels in the national capital.

The national capital on Monday morning witnessed another day of a thick layer of smog with the air quality remaining in the 'severe' category. However, the situation improved later in the day as the wind speed in Delhi-NCR increased to 18 kmph on Monday morning due to which the 'severe' air quality saw some improvements. However, the air pollution in the national capital and surrounding areas still remained under 'very poor' category.

In a notice, EPCA chairman Bhurelal announced a slew of measures to combat the air emergency situation prevalent in Delhi-NCR for the past few days. Along with crackers, the EPCA has decided to close all hot mix plants and stone crushers till November 8 in all NCR districts. 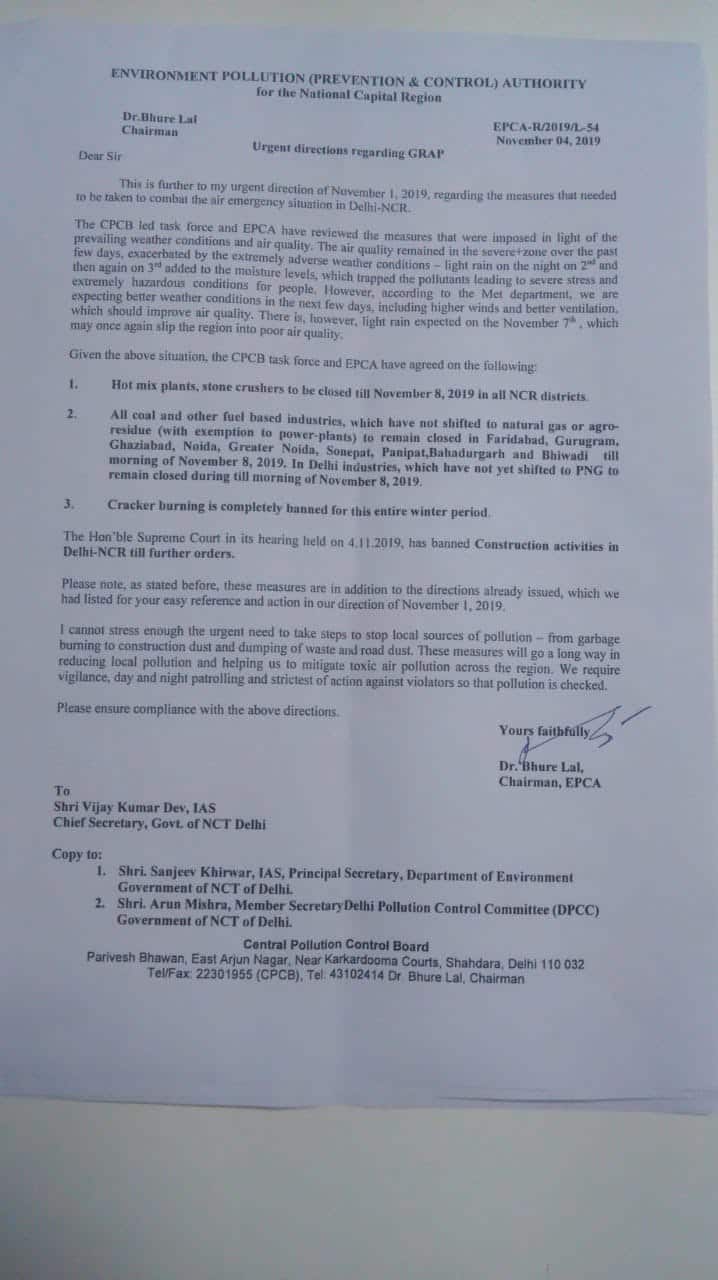 The EPCA has further directed that all coal and other fuel-based industries, which have not shifted to CNG or agro residue will remain closed in Delhi, and entire NCR region including Faridabad, Ghaziabad, Noida, Gurugra, Sonipat, Panipat among others until the morning of November 8.

On Monday, The Supreme Court had ordered a ban on all the construction activities in Delhi-NCR until further orders.

The EPCA added that these measures are in addition to the measures it had announced on November 1.

The Delhi-NCR region is also likely to witness a rainfall on November 7-8, which will further help in bringing the air quality to normal, thus probably putting an end to the serious health crisis.

On Monday morning the AQI level in the national capital region was recorded at 708. The Noida and Gurugram region recorded 720 and 833 AQI respectively both remaining at 'hazardous' level.